The Art of Island House 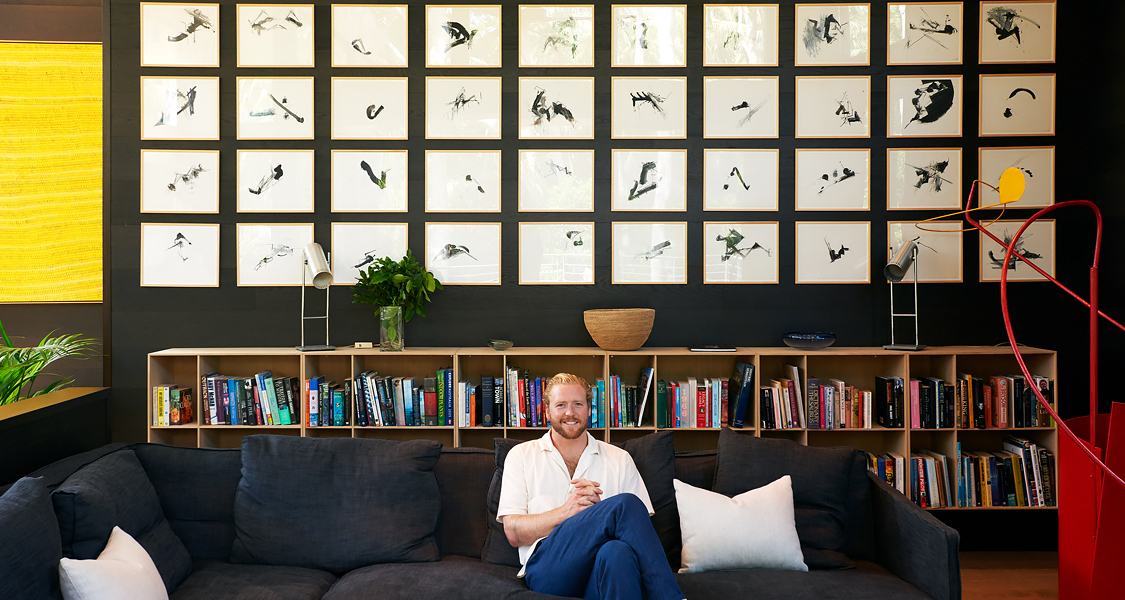 Island House was created as a place to showcase design in a remarkable island setting. The setting in question, Lord Howe Island, a crescent-shaped volcanic outcrop in the Tasman Sea, is certainly remarkable. And it’s just about as remote as you can imagine. About 375 miles off the coast of Australia, and just over 6 miles from end to end, it’s a place of extraordinary natural beauty, but probably not the first place you would expect to find this striking installation by Danish contemporary artist Tine Holscher.

We contacted Island House’s owner Tim Maxwell (pictured top) to find out more about the paintings (there are 60 of them), and in the process discovered more about the story of this remarkable home. 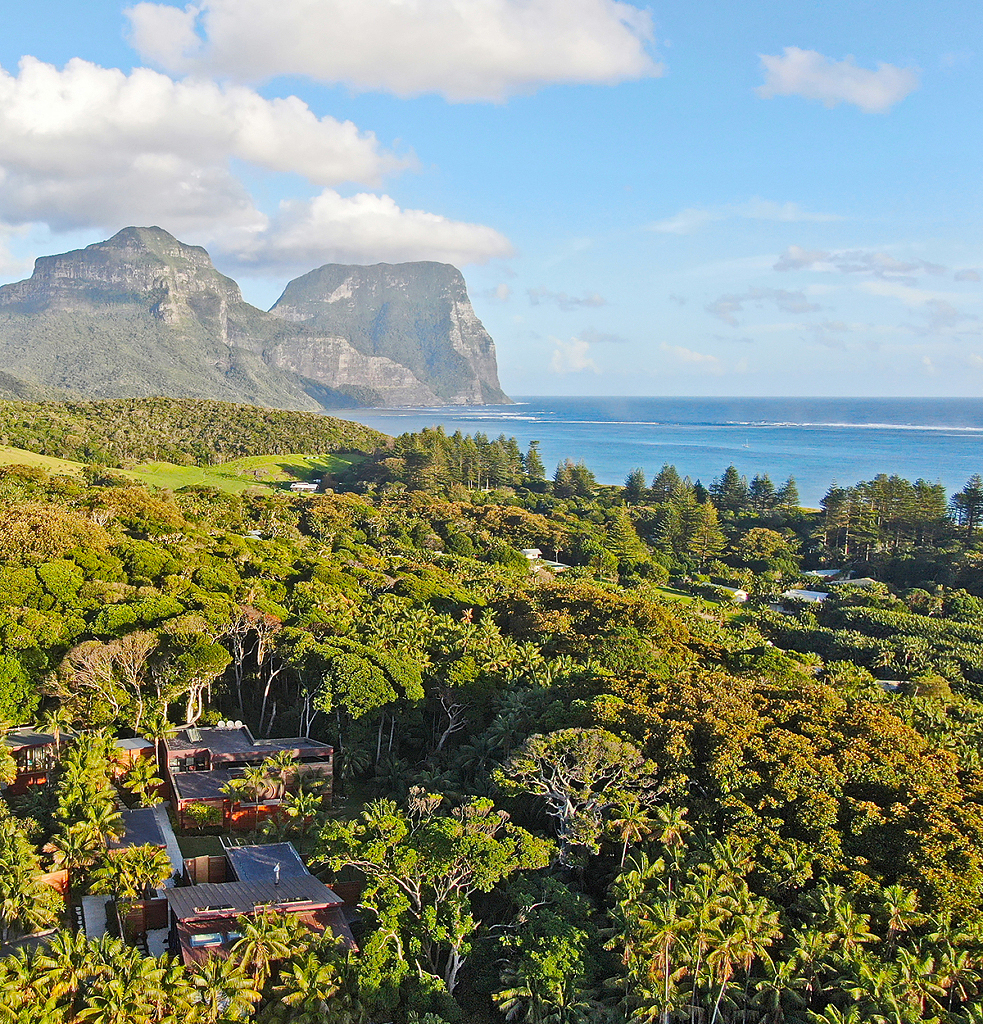 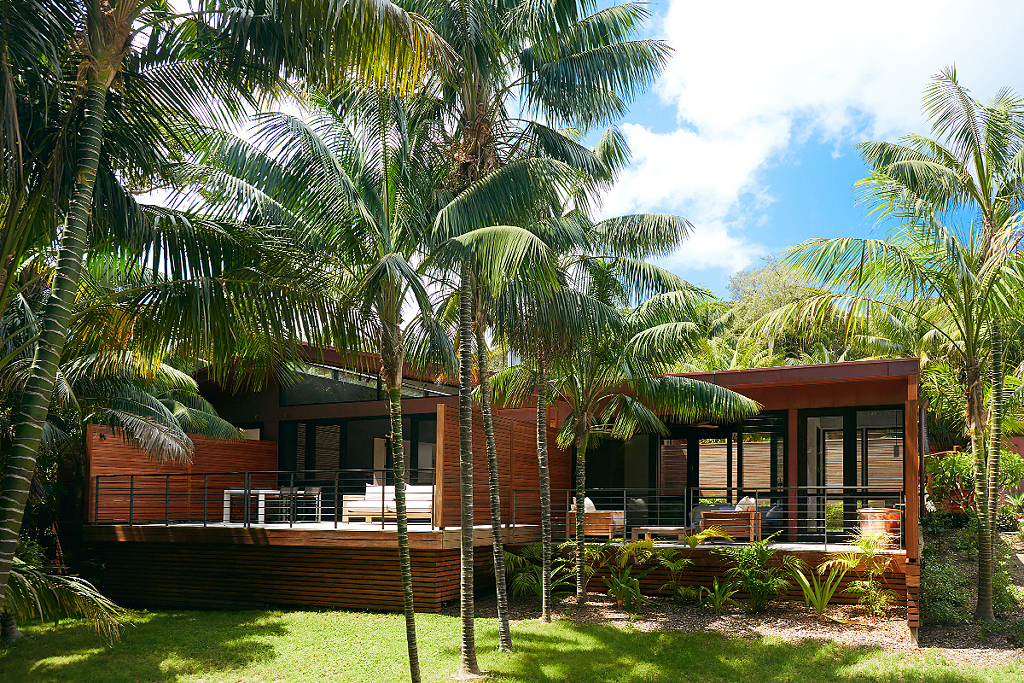 Tim’s background is in hospitality but, inspired by his father Michael’s obsession with mid-century furniture, the Australian native has become something of an aficionado himself. He’s traveled to design markets in Copenhagen with his father and to artisan workshops in Kyoto, and in the process he’s developed a love for functional design, objects that people will love and use.

It’s this aesthetic he and Michael have brought to Island House. As he tells us, “There is nothing trendy or fancy about Lord Howe Island. It’s timeless, and we’re just visiting it on a pinprick of its timeline – so we chose timeless design.”

For the house, they combined simple oak floorboards, classic mid-century furnishings and aboriginal art, as well as cookware, knives and pottery from Kyoto – pieces that wouldn’t compete with the jungle outside. “The hero here is the island,” he explains.

While in Copenhagen, they were introduced to an up-and-coming design store and gallery called A. Petersen, located in the outskirts of town in a repurposed industrial building, where Tine Holscher’s paintings were on display (below). Tim and Michael were immediately struck by their beauty, the originality of their format, and a style that seemed to defy geographical categories.

“The best art keeps you intrigued,” says Tim, admitting he often finds himself walking by the piece and getting caught up in it all over again. 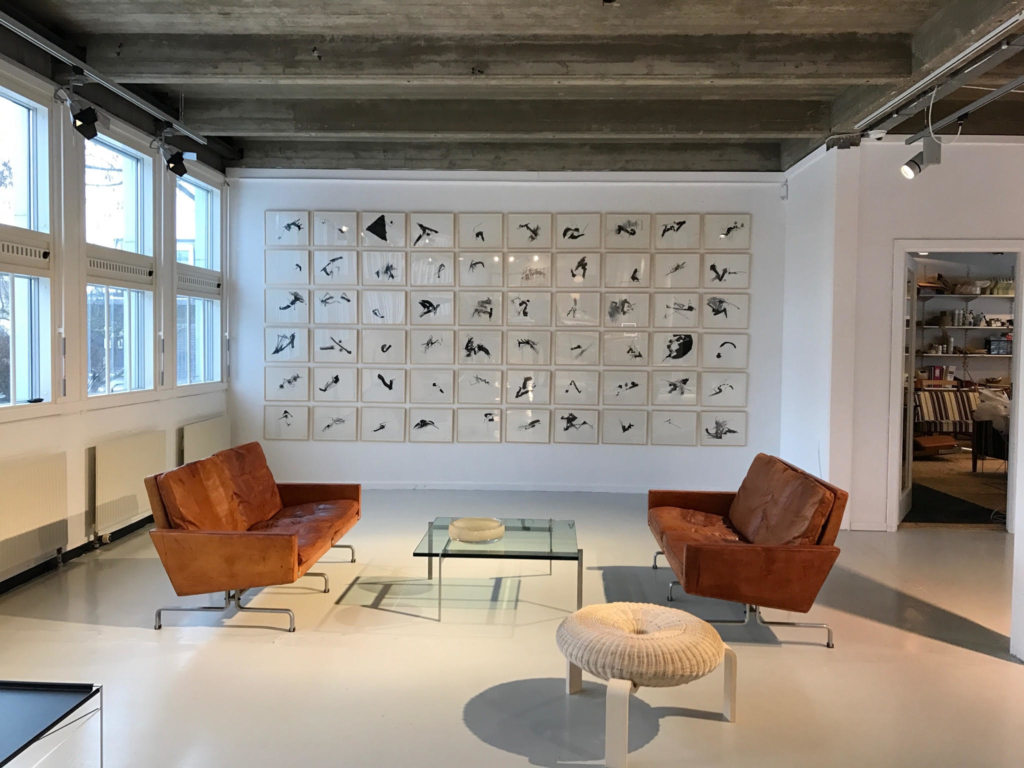 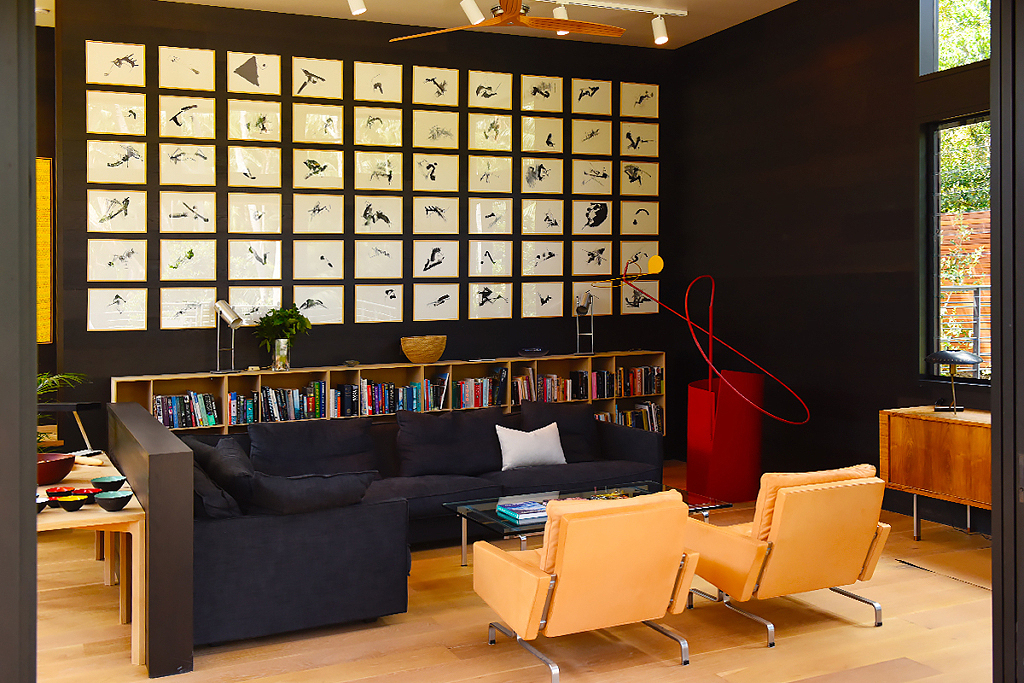 We reached out to Tine Holscher to find out more about the paintings, and she told us they are exercises in geometrical expression, combined with calligraphic, expressive brushstrokes, created intuitively using pens, pencils, charcoal, ink and acrylic to create the different blacks.

It’s an imposing work. Luckily, the two houses that make up the property have 4-meter high ceilings, which means there were quite a few spaces where the installation could have been placed to show it off to best effect. It eventually found itself on the black wall in the South House. “This one worked because behind it are black-stained oak boards that made it pop,” Tim tells us, “and the patina of the frames matches the floorboards.”

He is particularly pleased about an unexpected coming together of the two worlds, European and jungle, that he found in that placement. “The artworks face the jungle, and at certain times of the day, the backdrop of the jungle reflects onto the works,” he says.

Everything in the space has been thought through carefully. Two chairs by Danish mid-century designer Poul Kjærholm face the art, and beside it stands a sculpture in vivid red by Danish modernist artist Ib Geertsen, which, says Tim, “also provides some international intrigue. The art doesn’t scream nationality. Good timeless design is international.” The Geertsen piece in turn inspired the design of the quirky orange island that stands in the center of the open-plan kitchen. 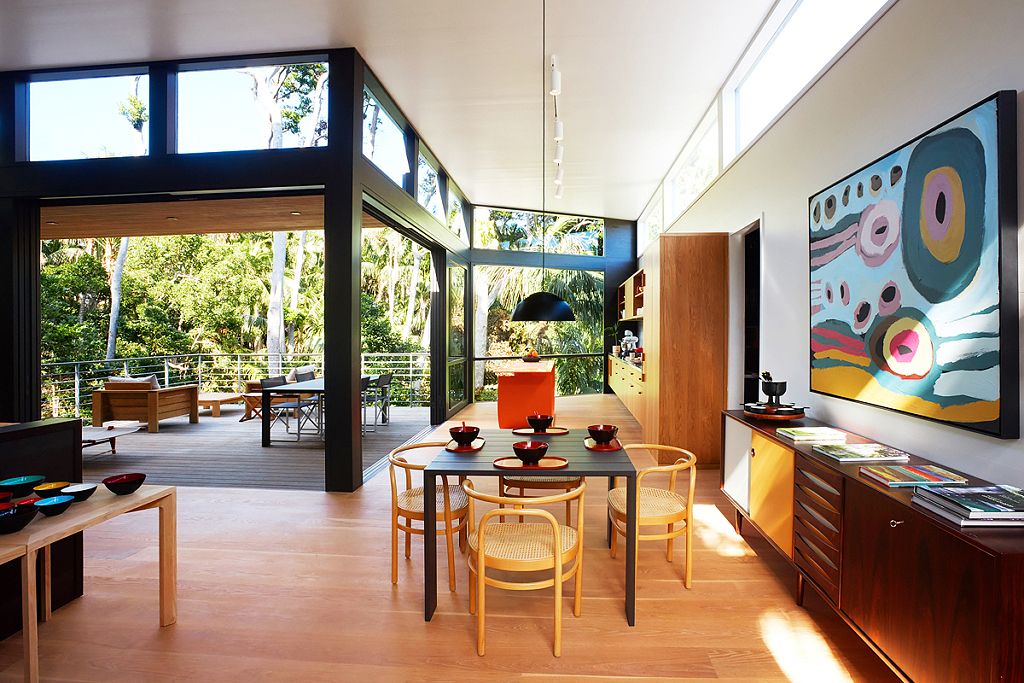 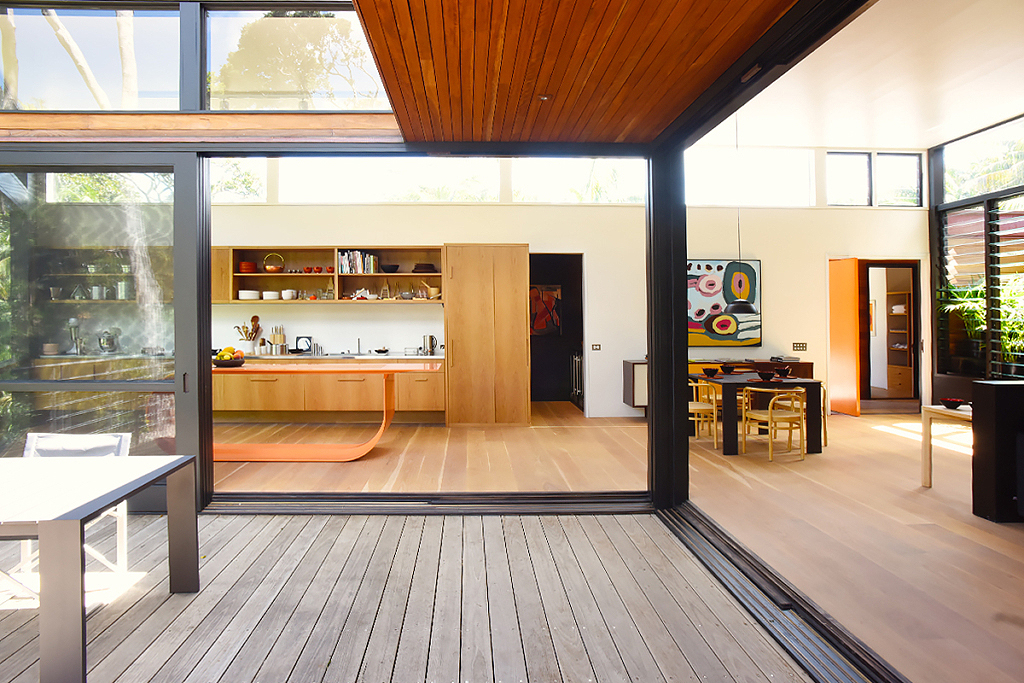 When asked what it was like bringing all these pieces to this tiny island, Tim laughs. It was, he says, both technically and physically difficult. It took a ship three days to reach the island from the mainland, and on its arrival there were a lot of sore backs. However, in spite of the heavy lifting, he also remembers the locals finding it all very entertaining. One of them, on seeing the Geertsen sculpture, exclaimed, “Mate, that’s a funny-looking barbecue!”

And that’s just fine with him. This is a home to be admired and enjoyed. “We don’t want to be precious about the materials and items that have been placed in these houses,” Tim says. “What a lonely life for a beautiful thing to be placed on a shelf and never used, a chair that is never sat on.

“We are so enthused by the prospect of guests using and building experiences around pieces of art and design where the original architect would never have suspected their design to end up, on a tiny speck in the middle of the Tasman Sea.”

To see the installation by Tine Holscher up close, visit Island House here. To see more of Holscher’s work, visit her site here.