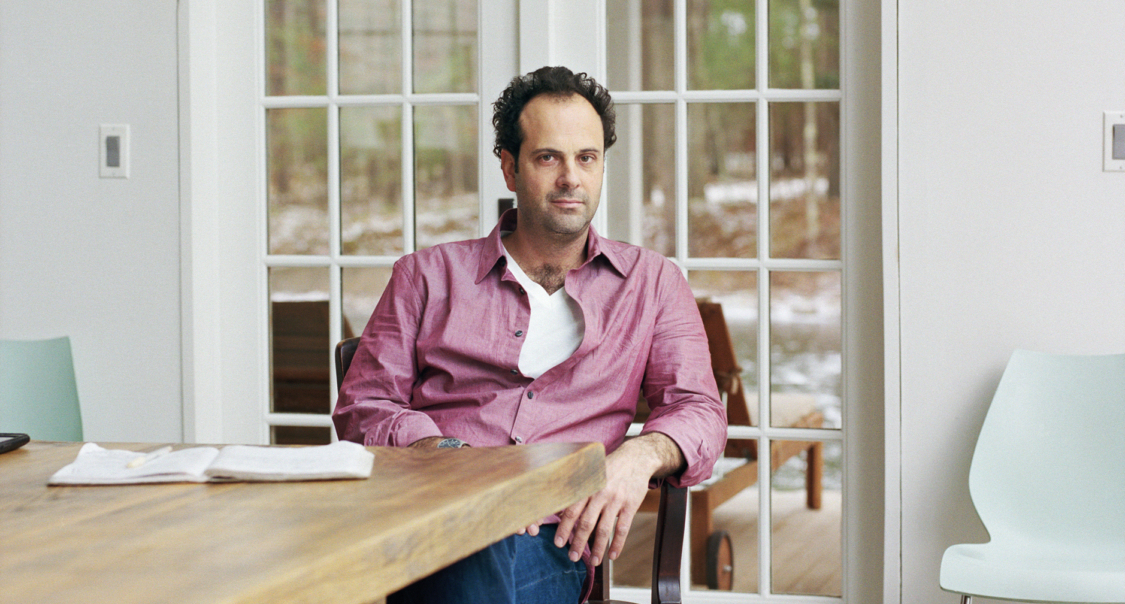 In 1998, Tom Givone was working as a writer, living contentedly in New York’s West Village, when he started having landlord problems. “It was a typical New York story,” he tells us. “I was living in a great little studio on Perry Street – they would’ve had to drag me out of there wearing a toe tag. But my landlord was intent on harassing me into leaving to raise the rent. In the end, he did me a huge favor. I should actually send him a fruitcake or something.”

The unfortunate events proved to be a catalyst. Disgruntled at having to leave his beloved bolt-hole, Givone started looking at what he might be able to buy. He ended up in Harlem, wandering down Sylvan Terrace, a cobblestone row in the National Historic District of Sugar Hill – and it was there that he fell in love. “I was smitten with the block,” he remembers, “I couldn’t believe it existed. I knocked on every door ’til I found one that was available.”

He bought the row house and set about restoring it, without any design or building experience. That was 1998. Since then, he has bowed out of copywriting, restoring and designing numerous homes for clients and five of his own, including the luminous Floating Farmhouse in the Catskills.

We sat down with Givone to find out more about his intriguing journey from writer to much-lauded home designer. 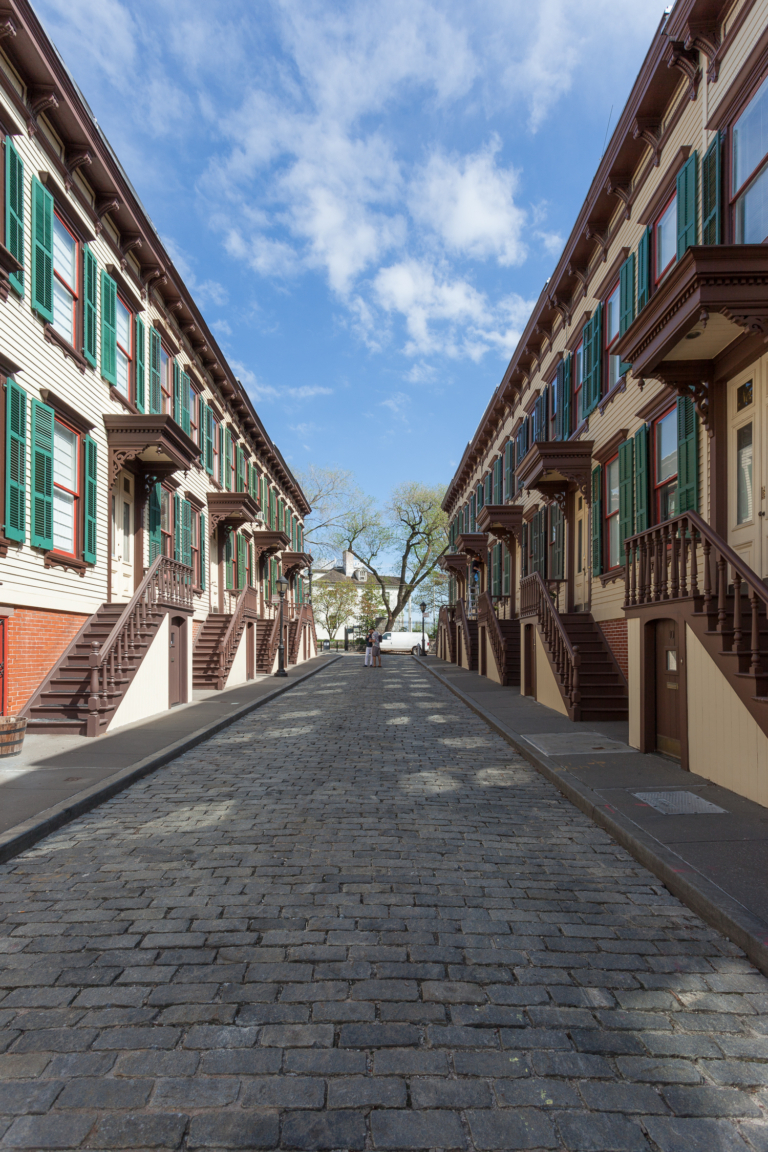 YOU HAVE QUITE A REPUTATION FOR YOUR ARCHITECTURAL DESIGNS, BUT YOU’RE SELF TAUGHT. HOW DID THE SYLVAN ROW HOUSE START YOU ON THAT JOURNEY?

Tom Givone: “I initially hired a contractor who was patently dishonest and awful; he moved all his tools and equipment into my house for storage and called me numerous times a day, ostensibly working on site but actually drinking at a local bar. So, I fired him and hired his workers, to learn from them. That’s essentially how I got started.

“I loved coming home from work, ripping apart walls and having this very intimate, tactile experience of structure, teasing the building apart and unearthing pocket doors, fireplaces sealed behind sheetrock, and other assorted buried treasure.

“From there, I pushed north to the Catskills, bitten by the same bug for old farmhouses. Then, after 16 years of amassing lots of hard-won architectural and building knowledge about systems and materials, I was ready to do a proper gut renovation of Sylvan Row House.”

TG: “I’d come full circle. I knew what I was doing. I knew what to look out for and now had a few design tricks up my sleeve. Just one example: vaulting the top floor ceiling all the way to the roof, 15 feet above, using insulation and sealing techniques that allowed for proper R-value while also exposing the original roof beams. Having all this construction knowledge really helped me push the design of the space.” 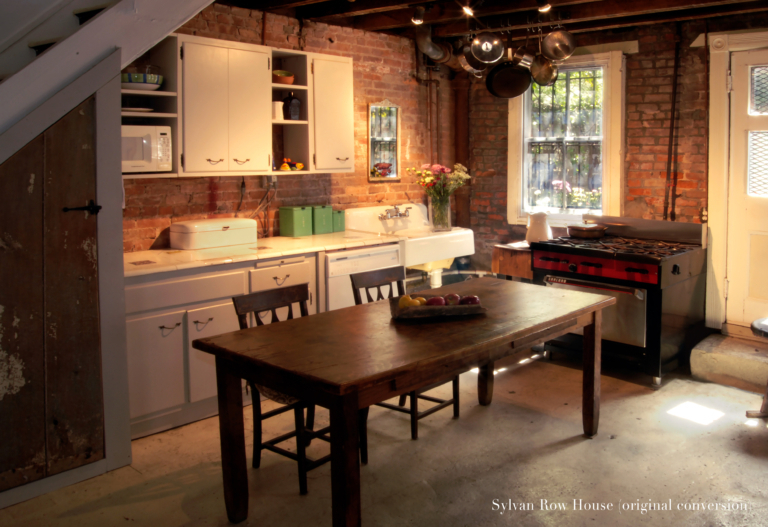 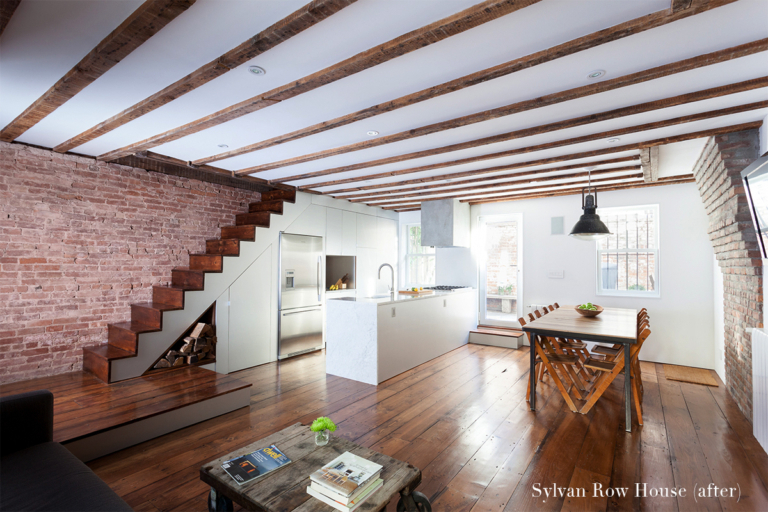 Tom Givone: “I’m not exactly sure where this yearning came from. But I was always pretty artistic, and did love Italian design, even as a small boy – auto design, just lines and form. I studied English Literature in college, but I didn’t explore architectural design ’til I was forced to move out of that West Village apartment and found Sylvan Row House. That struck the match, I guess.”

MAYBE THERE’S SOMETHING ABOUT KNOWING HOW TO CONSTRUCT A PARAGRAPH THAT TRANSLATES TO CONVERTING HOMES AS WELL?

TG: “True. Both are a craft. You chip away until beauty presents itself.”

HAVE THERE BEEN MANY MISTAKES?

TG: “Where to begin! Nothing catastrophic; I just at times have underestimated the sheer volume of work that goes into transforming an old home, both conceptually and materially. That initial sense of pure joy and excitement soon gives way to reality, running into walls that often conceal horrifying conditions and feeling smacked accordingly. But always learning and growing and pushing towards my end vision, and getting there come hell or high water. Something else I’ve had to contend with in many an old basement, come to think of it.

“But once I’m in, I’m all in. And each time I think I know what I’m in for, I’m of course surprised. Every old house is a mystery. And I do push the envelope — choosing unusual materials for atypical applications — and kind of set myself up for challenges in that way. But the results are always worth the risk.”

SO, YOU’RE NOT RISK AVERSE?

TG: “No. Materials will do what they do. You have to respect and understand them. They’ll teach you that they shrink, that they expand, that they change color in different light. So, I may have an idea that seems simple enough in my head, say using 4’ x 12’ sheets of anodized aluminum, or MacBook material, to clad the soaring gable wall of a 19th-century barn, but as I’ve learned from previous experimentation, that particular material tends to expand a fraction of an inch in the sun, so I leave gaps between the panels so they can expand without warping each other. That kind of stuff.” 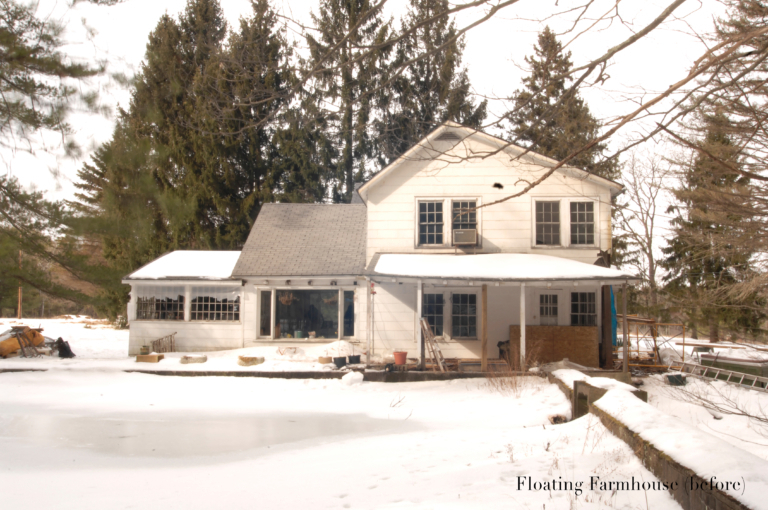 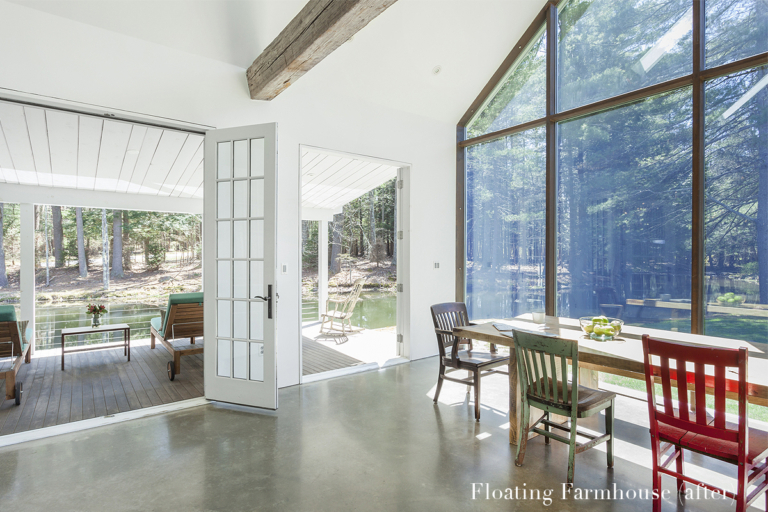 WHAT ARE YOUR DESIGN INFLUENCES – A COMBINATION OF EARLY AMERICAN AND LATE MODERN ARCHITECTURE?

Tom Givone: “Quite the Frankenstein combo! When I was four or five years old, I would travel into the city with my grandfather by train, pressing my face to the window as we wound through Harlem, mesmerized by those crumbling old brownstones, derelict but glorious. That memory was deeply etched and influential from the beginning.

“And the modern, that’s more of a taste thing. I love minimalism and economy of lines. I really admire that design discipline. But I also love these old, ramshackle homes with old doors and trim. There’s something very pure about that as well. So seeing that common thread, I just kind of started stitching them together, see what comes out in the process.

“As such, I don’t do too much ground-up design. I like to have an old building to work with, push up against, and reinvent. That just feels to me like a more natural fit.” 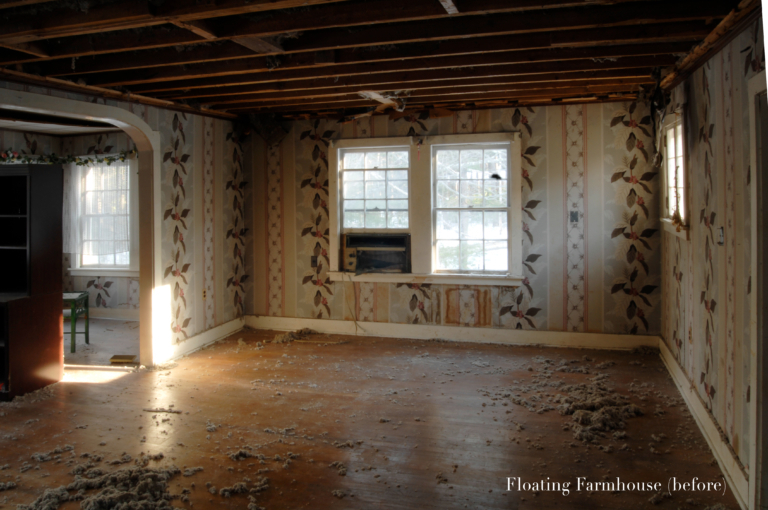 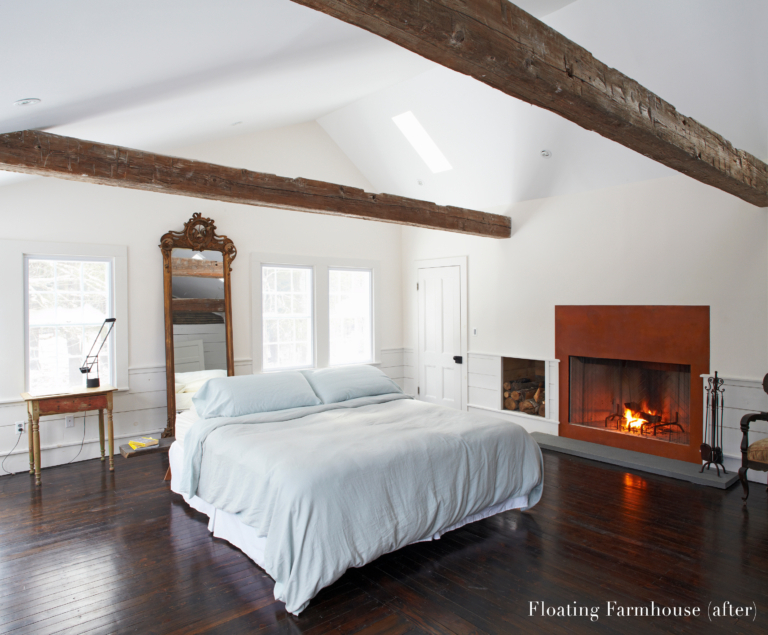 WHAT DO YOU FEEL HAVE BEEN YOUR GREATEST SUCCESSES?

Tom Givone: “I’d say a client project called Twist Farmhouse in rural Pennsylvania. It’s pretty out-there, a torqued volume grafted onto the side of an 1800s farmhouse. I loved pulling that off, and pulling in all these unorthodox partners, like a rollercoaster track manufacturer, in the process.”

YOU’RE GOING TO HAVE TO EXPLAIN THAT!

TG: “The volume was so unusual, the main question became: how do we frame it? The answer was a series of gorgeous sculptural columns that, when joined by horizontal framing members, revealed the building’s fluid form. And because the columns were so twisted, a roller coaster manufacturer was required to fabricate them, much as they make twisting tracks for gravity-defying loops.

“They arrived on a large flatbed truck at sunrise, craned high overhead and bolted in place on the foundation’s perimeter, a small forest of sci-fi shapes stretching towards the sky. It was an amazing moment.”

WHY DID YOU DECIDE TO OPEN YOUR HOMES TO GUESTS?

TG: “I approach homes as art works. They take years, which makes me a lousy flipper. So with Floating Farmhouse, for example, I thought perhaps I could offer it as a short-term rental, instead of selling it, and invite others in that way.

“What I didn’t anticipate was how rewarding it would be to share my homes, and by extension my life’s work, in such a personal way. Having guests experience the same joy I felt upon first seeing them, in their original broken and battered states, is a gift that keeps on giving. As guests see it for the first time, so do I, again and again.” 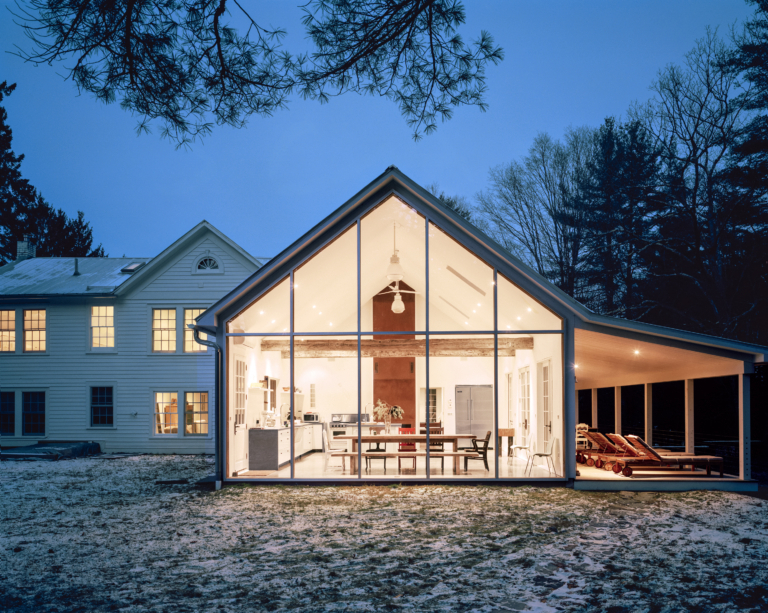 The Floating Farmhouse, designed by Tom Givone, is available to rent through BoutiqueHomes.