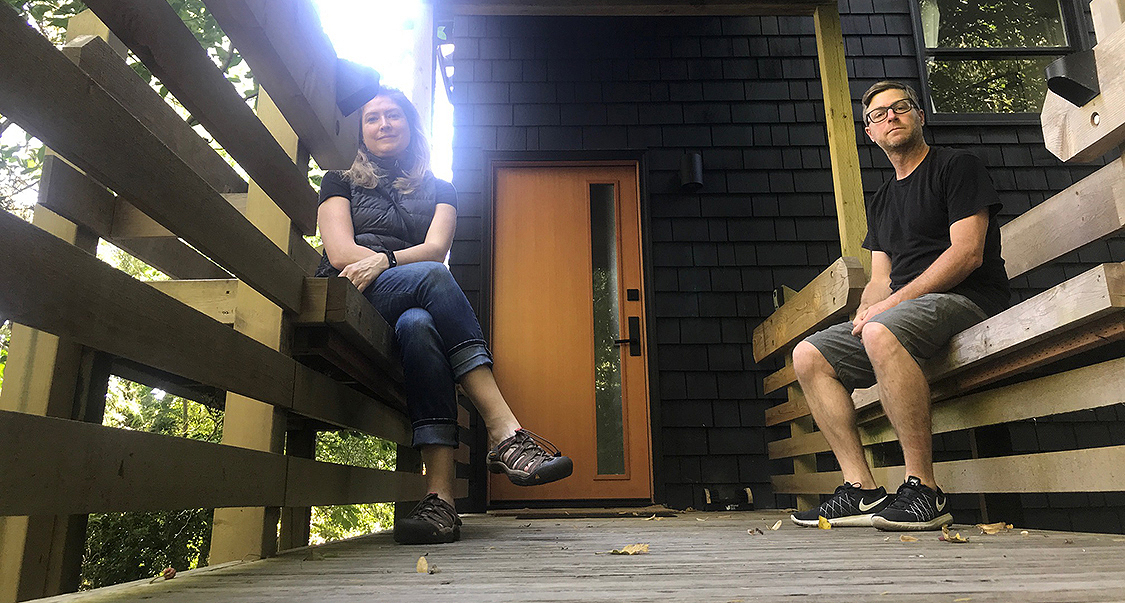 Cole Gerst and his wife Lea Anne never got a chance to meet mid-century architect Marvin Witt, who designed Oregon Coast Modern, their beach home in the Neahkahnie, Oregon. Witt passed away soon after they became the second owners, but the before-and-after photos seem like a dialogue between Witt and the Gersts.

Witt designed Oregon Coast Modern in the early 1980s, capturing the essence of Pacific Northwest living: light-filled spaces that harmonize with Mother Nature. It’s a cathedral to Douglas Fir and cedar, with 25ft ceilings and a treehouse-style design. Three stories bathe you in the surrounding forest.

When Witt owned it, it was a gathering place for loved ones where Lea Anne imagines them playing games of hide-and-seek. It was also quirky, with a fireplace in the middle of the living room, zigzagging stairs leading through the roof, and a sink outside the downstairs bathroom.

When it was time for the home to change hands, Witt’s legacy passed into four able ones: Cole is a graphic and product designer, and Lea Anne is a creative studio director for a design agency. We spoke to the couple about restoring a modern treehouse. 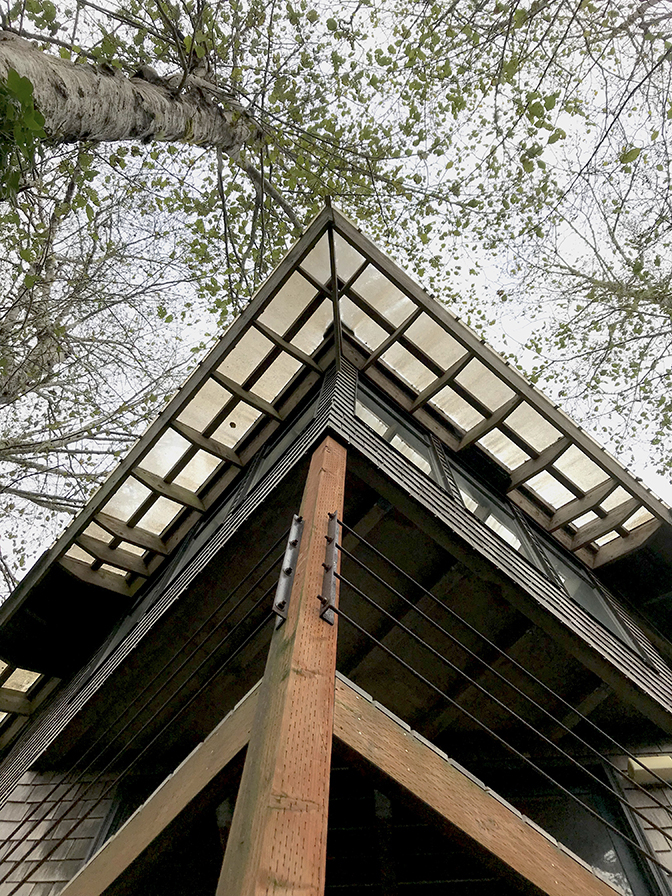 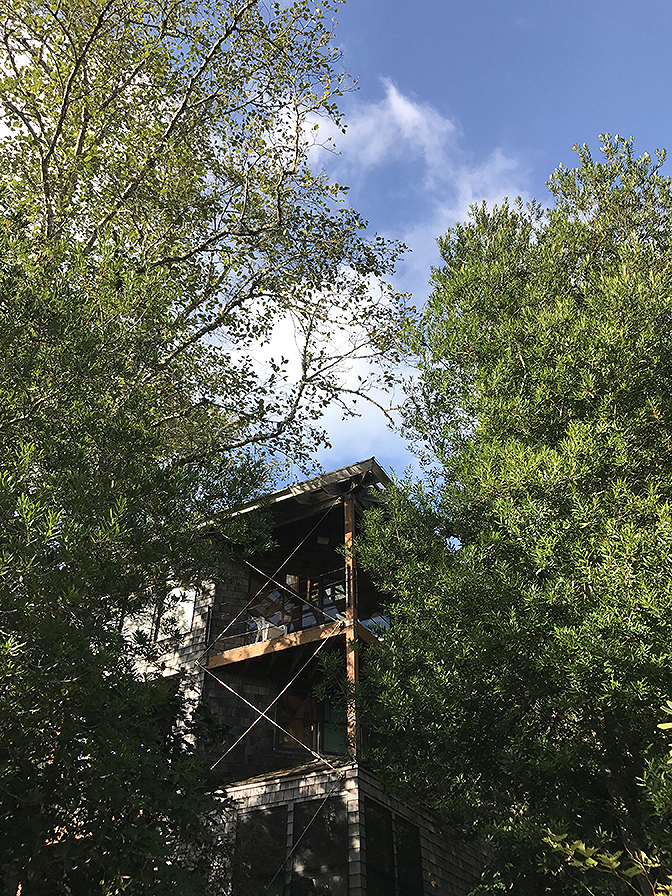 HAS DESIGN ALWAYS BEEN IN YOUR BLOOD?

Lea Anne Gerst: “More so for Cole, but the coast house kind of brought us together. It was an opportunity for him to run free. We definitely made the decisions together, but I see the coast house as a bit of his masterpiece.”

Cole Gerst: “When I was growing up, my father had a furniture store. He taught me about architecture and design. Over the years I gravitated toward the modern stuff, but we always had that connection. And I went to college for graphic design [at Atlanta College of Art], so even when I was a kid I used to doodle, and I used to draw house plans. When I was eight years old, I wanted to be an architect. But I decided to go into graphic design – it just seemed easier.”

HOW DID YOU FIND OREGON COAST MODERN?

LG: “We were in escrow on another modern home in Neskowin, but I could just tell that Cole’s heart just wasn’t in the property. Then, the property at Neahkahnie popped up. So that weekend, we saw the property and fell in love with the potential of it.

The architect was ill, and there were other bids on the home, but the real estate agent let him know that some artists wanted to purchase the house – who we were and what our intentions were.”

CG: “We were the first and the lowest, but he said he wanted artists to have the house. It was really cool.” 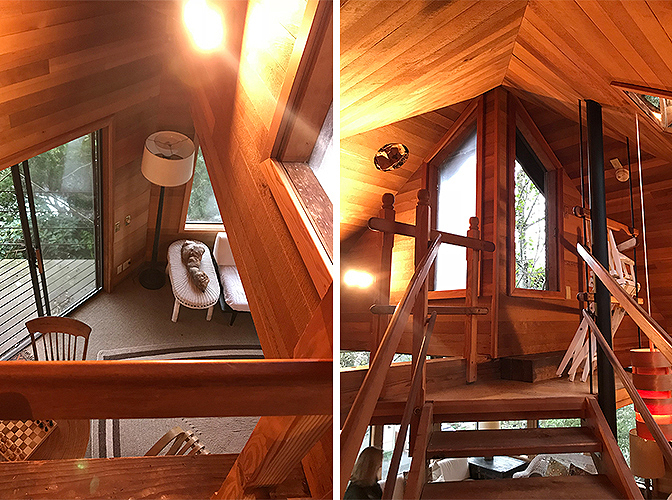 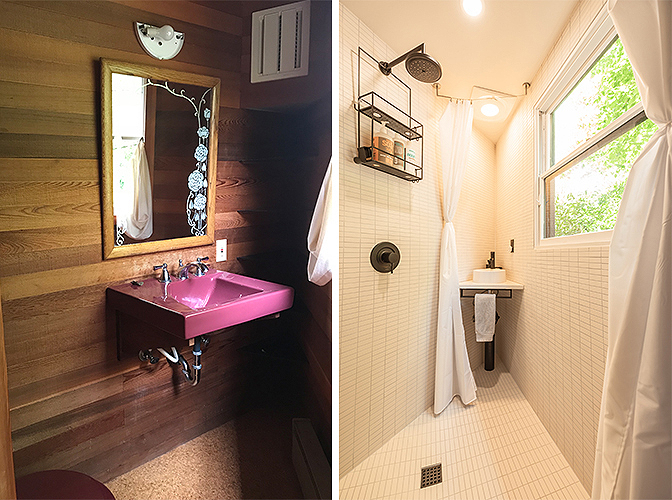 WHAT DOES IT FEEL LIKE TO BE IN THE HOME?

CG: It feels like you are in a luxury treehouse. I’m guessing it’s about 60 feet tall and once you are on the top floor you are literally in the trees. It feels a bit like a watchtower. On the third floor, there is a huge vaulted geometric ceiling, which is sort of a wow factor, as you take in the room and then look out all the glass windows into the trees.

LG: If you sit in the right spot on the deck, you can see the ocean and the mountains at the same time. And you can’t beat having a fire going in the winter and just watching it from the coziness of the house.

WHAT CHALLENGES DID YOU FACE?

CG: “There were some safety issues with the stairs. We called them M.C. Escher stairs because they zigzagged through the kitchen and top floor and went through a window. It was pretty cool, but also terrifying. Risa [Boyer] came out and drew the stairs for us, and the contractor was able to redo them. There was also a fireplace in the middle of the room with a pipe going all the way through to the ceiling. We also had to gut both bathrooms. One was like a trapezoid with crazy angles, and had a huge sink and a toilet in it.”

LG: “And we had such an exacting amount of space, especially when it came to the kitchen. We had to make sure everything could fit just perfectly. The whole house is 1200 square feet. So we had to try to find ways to multi-purpose, like making the upstairs bathroom a wet bath, for example.” 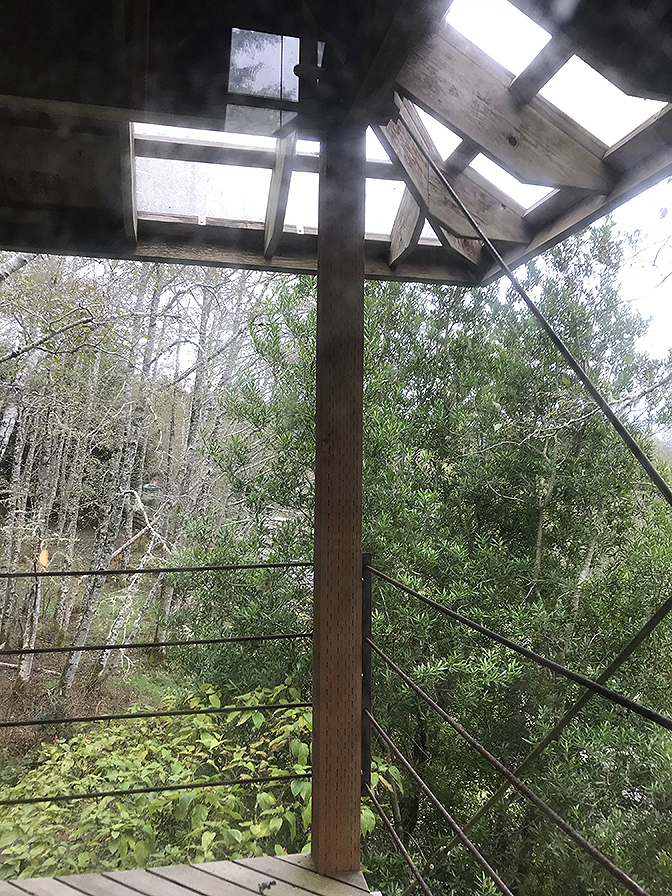 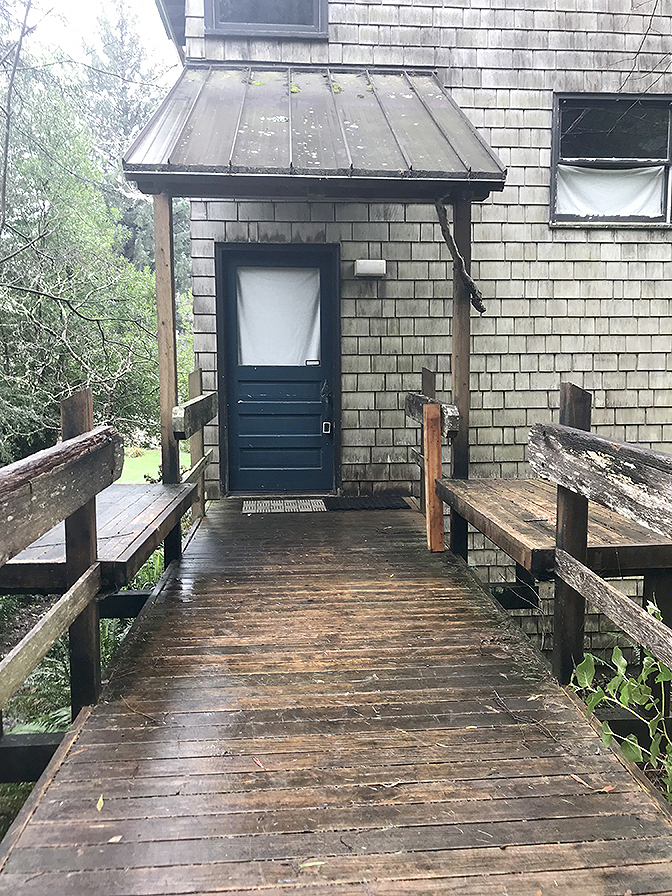 TELL US ABOUT THAT HIDDEN TELEVISION.

CG: “I designed this island where one side of it is in the kitchen, but on the reverse side is storage and the TV cabinet. So it’s all in one piece and it faces the living room. We didn’t want to stick it on a wall.”

LG: “That was a dilemma, because we didn’t know if people would want a TV at the coast. But we asked and people wanted it, so we decided to tuck it in somewhere, so it’s not a feature, it’s an option. It’s camouflage.” 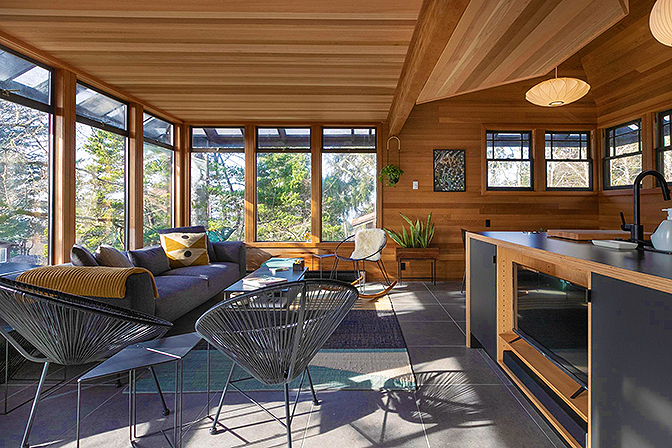 HOW ELSE DID YOU SAVE SPACE?

LG: “We spent a lot of time talking about clothing storage because there are no closets. So Cole found these amazing minimal Japanese wardrobes.”

CG: “They fit perfectly. We had to find the rooms’ measurements and scour the Internet and stores to find the perfect piece that just worked.”

LG: “Every piece of furniture was super intentional – we had inches. We also used a lot of floating shelves and hooks.

“I also want to get back to that fireplace, that old funky thing. So, we really wanted to have a fireplace, and to figure out how to get one that fit was a challenge. We finally did get one in there. It came a little bit later, right during the pandemic.

CG: “It wasn’t the exact fireplace we wanted. This was the only one that would fit per code and looks like we wanted it to look. It fits right into this little nook. I wanted something like a Scandinavian fireplace and this is actually made in the U.S. but it looks European.” 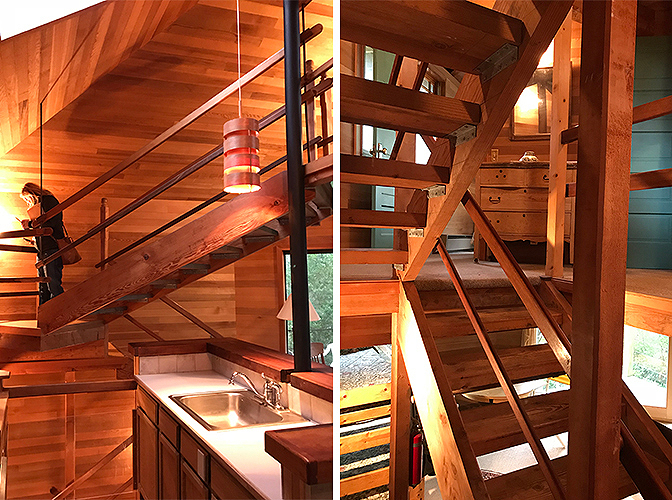 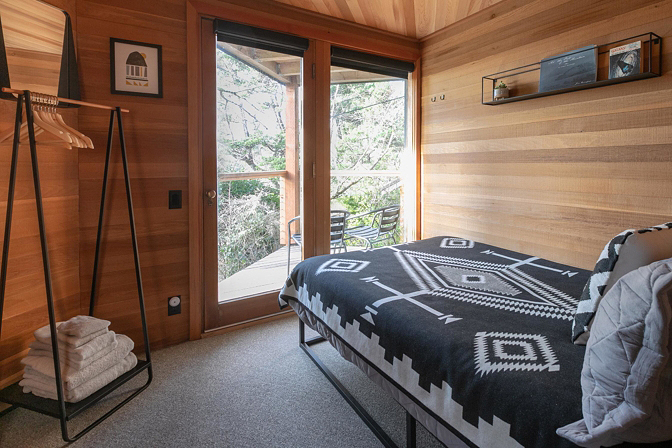 WHAT HAS THE RESPONSE BEEN LIKE, FROM GUESTS AND THE OREGON DESIGN COMMUNITY?

CG: “We’ve had a lot of designers stay, and there’s been an interior designer from Portland that stayed twice. Designers from Nike and Wieden + Kennedy.”

LG: “We’ve had some people reach out who knew [Marvin Witt] and said that he would be happy with what we did to the house. That made us feel really good.”

We were a little worried because we wanted to make sure that we preserved his original intent for the home. We were changing some things, but it was really just bringing it up to date and making it safe and streamlining some of the little oddities.”

CG: “It’s like they’re complimenting us, but it’s really for the architect. There’s also this non-profit called Restore Oregon that advocates for older, historic homes. And they reached out and told us that we’d done a good job.” 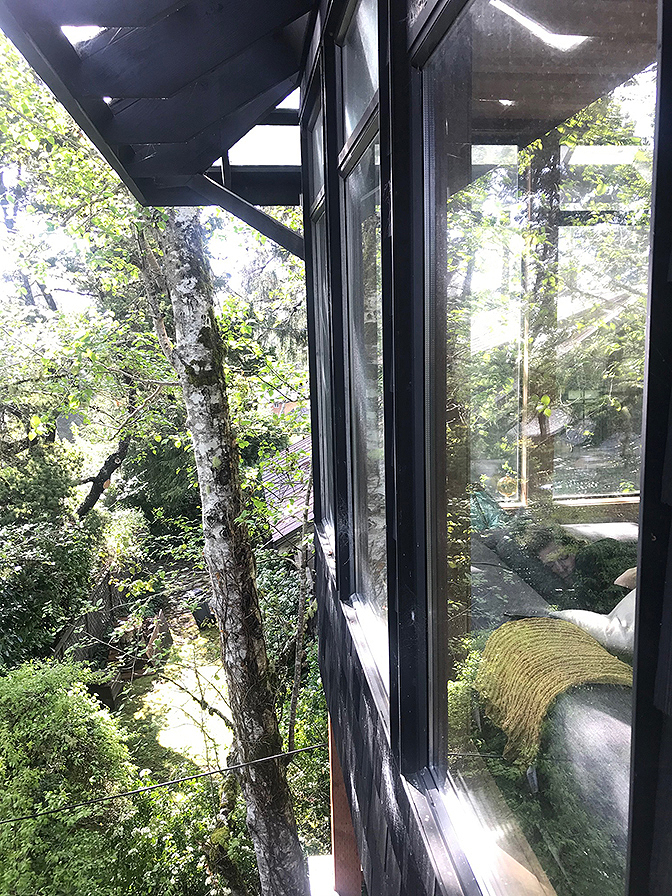 IS THERE ANOTHER RESTORATION IN YOUR FUTURE?

CG: “We’re looking again on the coast–we’d like another similar project. We flirted with moving out there too.” 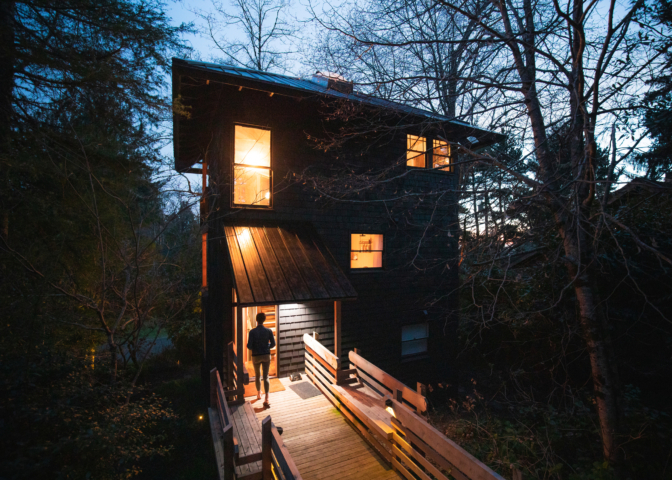 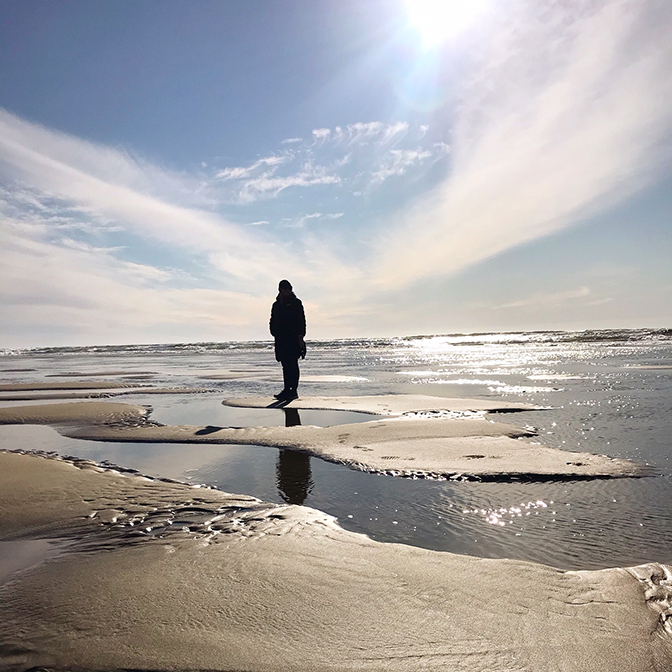 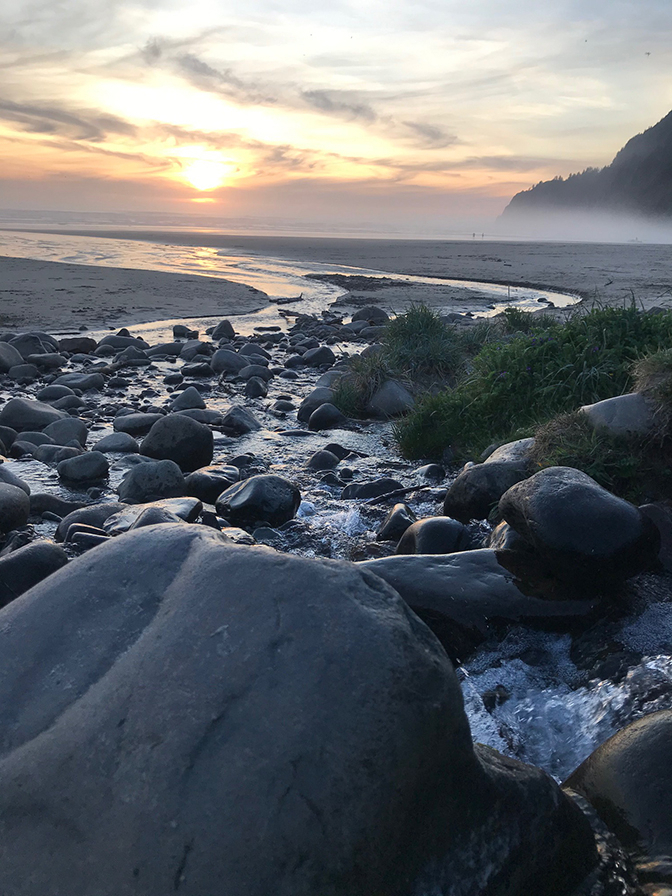