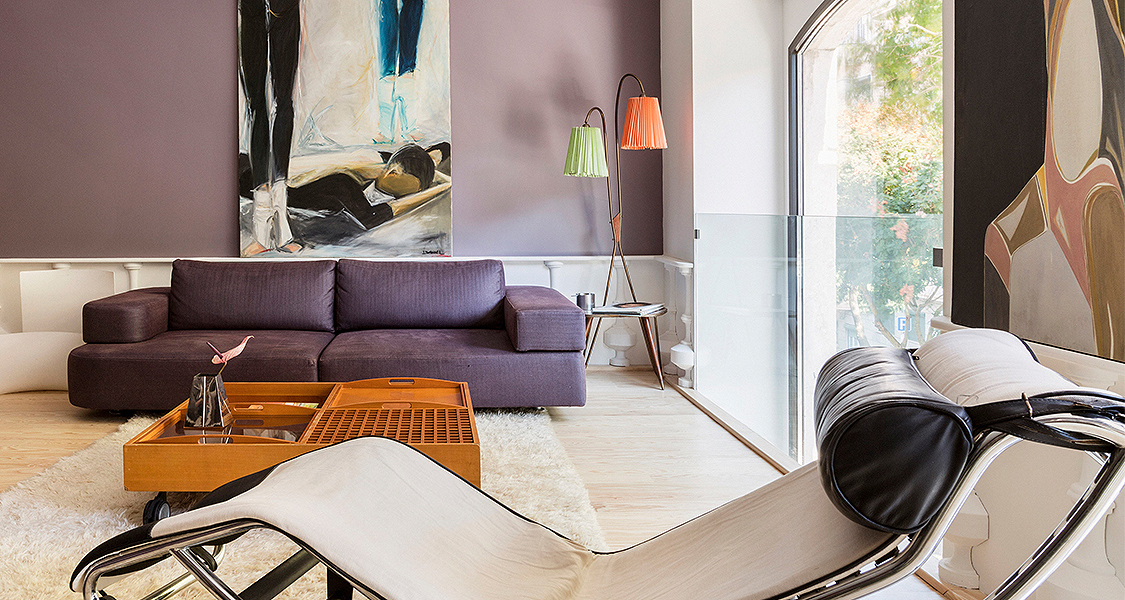 António Falcão Costa Lopes and his wife, Filipa Fortunato, met as architecture students. Today, they’ve been married for 21 years and live in the attic of a 100-year-old building that once housed Antonio’s architectural firm, with their four children. The Pombaline-style brick and limestone facade hardly assumes what lies within: a delightfully-curated collection of pieces both sleekly modern and drenched with color, mixed judiciously with life-pocked artifacts imbued with the family’s story. Room by room, Casa Fortunato unfolds like an exhibit.

“There was no formula”, Filipa says, in the interior design of this 9-bedroom family home; it happened naturally. “I think that all of the choices we make are connected, and they just work because it’s on our DNA. People say that it’s a special energy around the house. You feel it when you come in and when you stay here, and we believe that this is just because we’re not trying to be what we are not.” 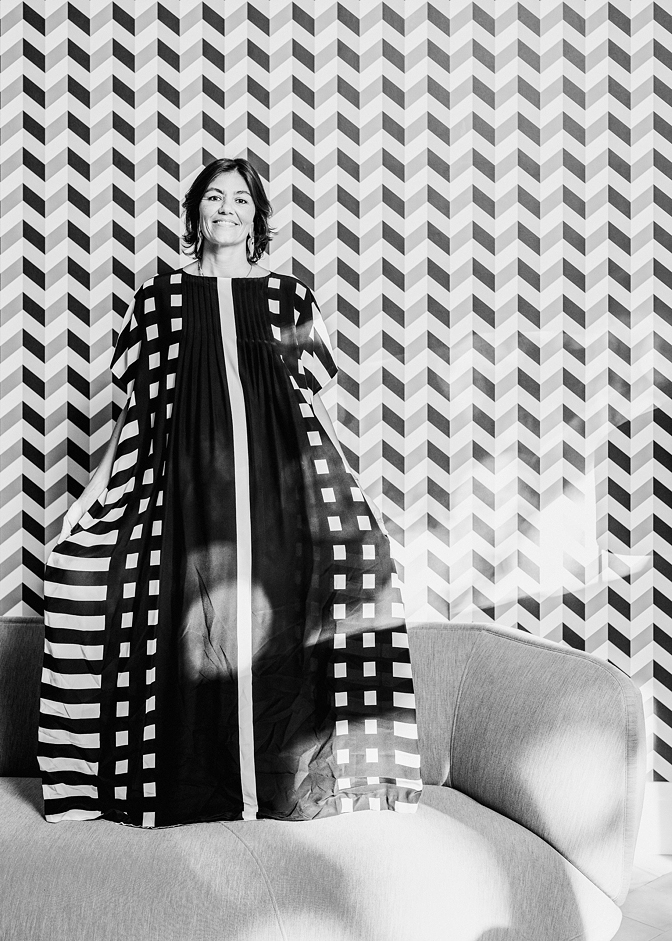 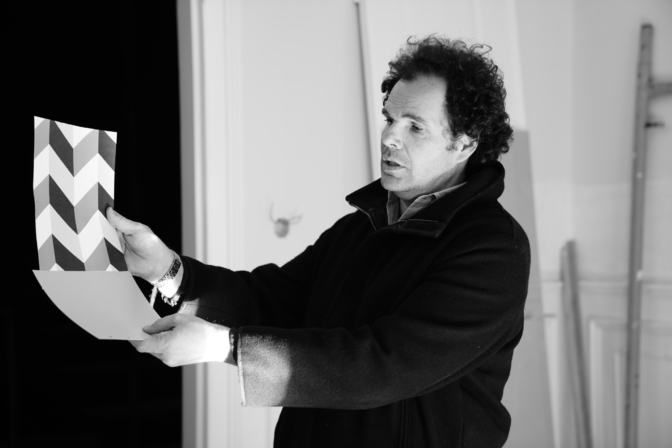 To get a sense of who they are, start in Reception, where a huge chandelier, handmade from dried leaves in the Portuguese countryside, dangles. The couple found it in a local antique shop and thought it would warm up the room by contrasting with the metallic desks, from Vitra and designed by Jean Prouvé. “Antonio has a passion for lights and chandeliers,” says Filipa, and adds that they’ve always been careful about selecting the right mix. “Light can either ruin a space or make it as comfortable as can be.” 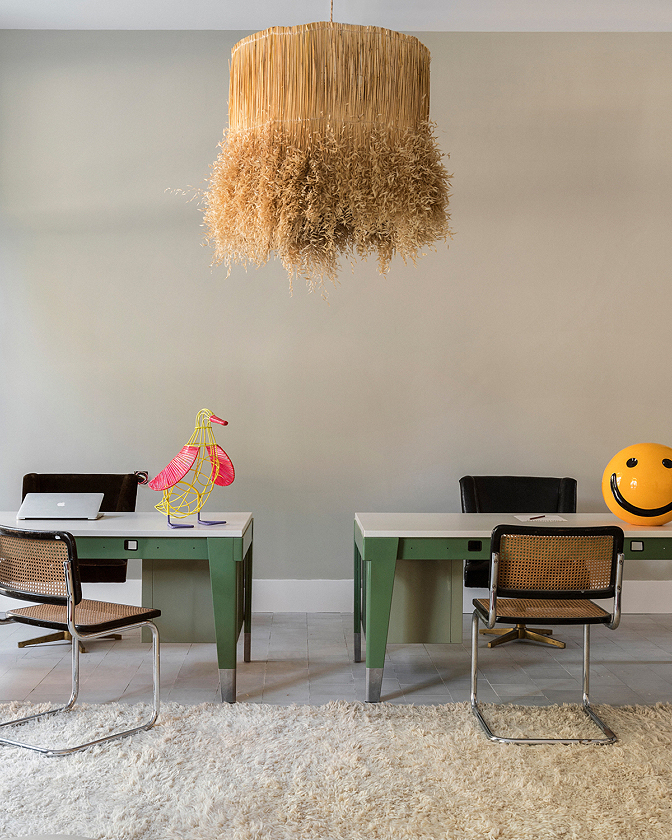 The nested story continues into the living area, with a 1960s floral sofa from a French designer – found in the same shop as the leaf chandelier – sitting below a rotating gallery that changes every season. The family has recently replaced the last piece with two black square paintings from the Africana Art Foundation. “We want to guests to come and we can say ‘Look what’s new.’ We want to change the flow,” says Filipa. Other oils from around the home include those by Filipa’s mother, Isabel Braz de Oliveira, who often paints dancers and the sea. She gave the dancer in the library to Filipa as a wedding gift. 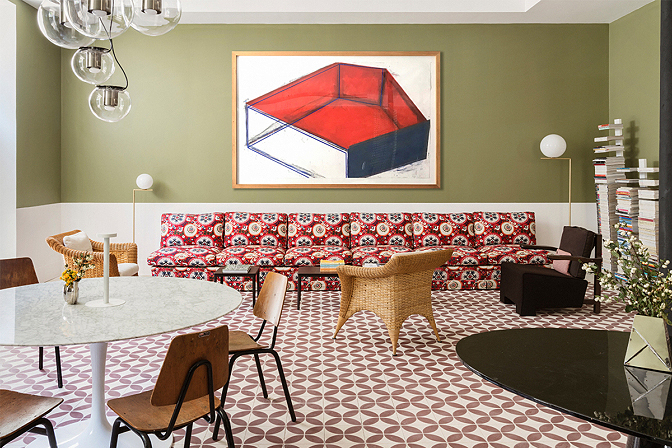 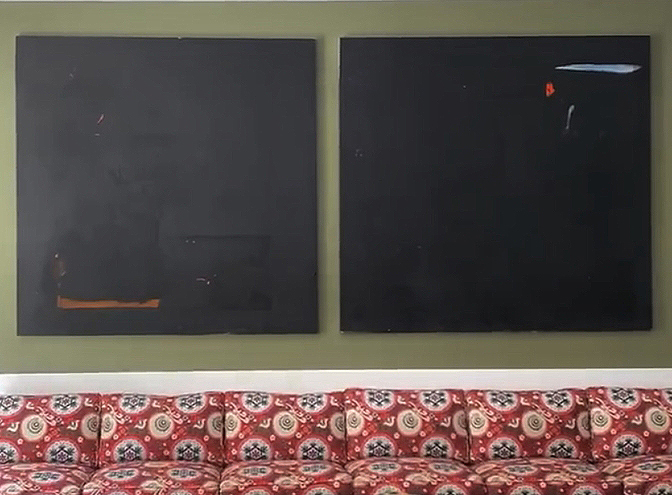 It takes a lot of restraint not to hang art here, as many of the walls are adorned in wallpaper or carefully-selected Farrow & Ball shades – so careful that each bedroom swatch was matched to the sun’s position each day. London-based Jupiter 10 wallpaper adds riotous pops behind the beds in most of the rooms. The idea arises from an architect who works with Antonio, who thought their colorful, graphic patterns would break everything up. 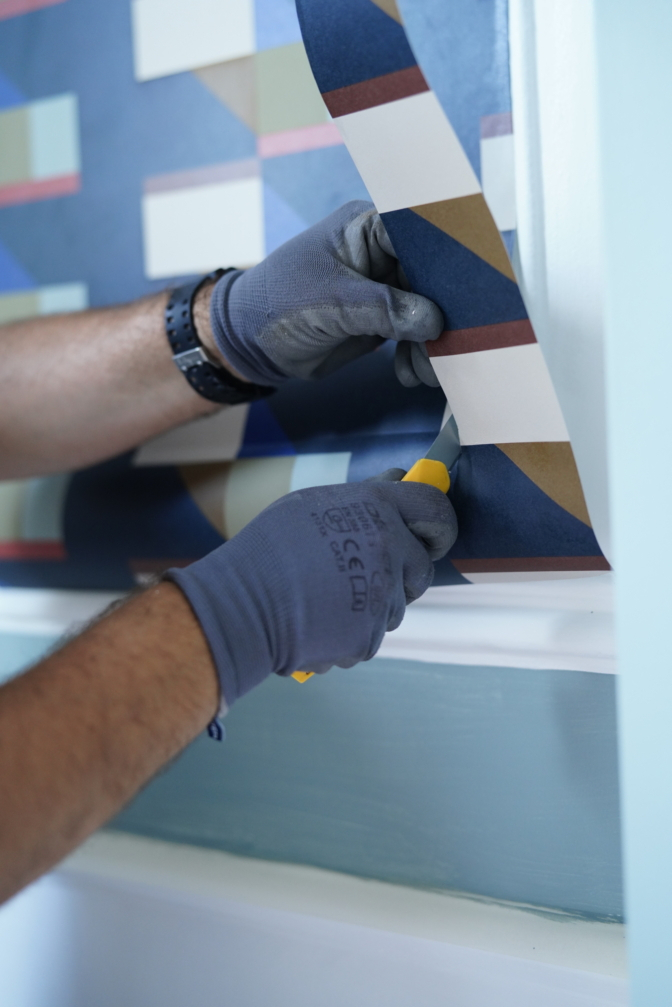 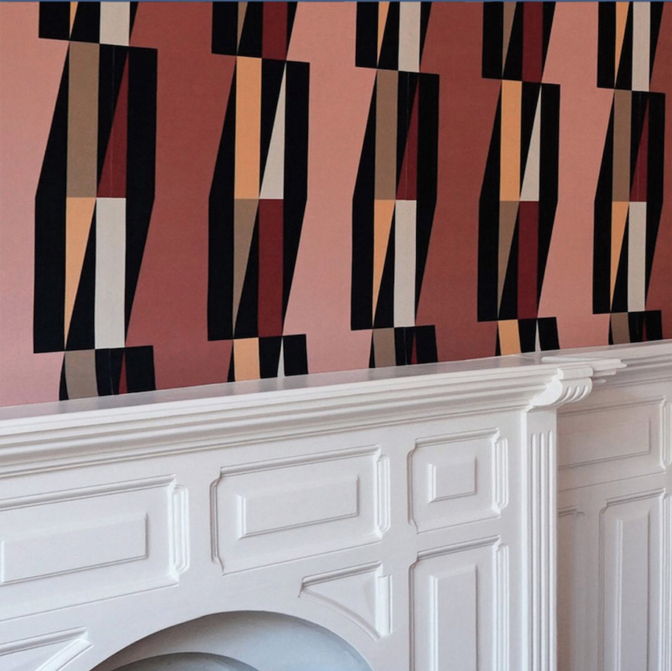 Adorning many of the sleek or time-worn surfaces are jars and dishes made by Kukas, Filipa’s godmother, a respected Portuguese jewelry designer. “We have five objects by her in each room,” says Filipa. Each was designed exclusively for Casa Fortunato. “She is a very special lady – 93 years old and still creating, all handmade. She doesn’t use computers and send the files to the factory. It was really interesting to participate in the process to see the mock-up and see her explain it to the manufacturer and see every object come to life,” she adds. 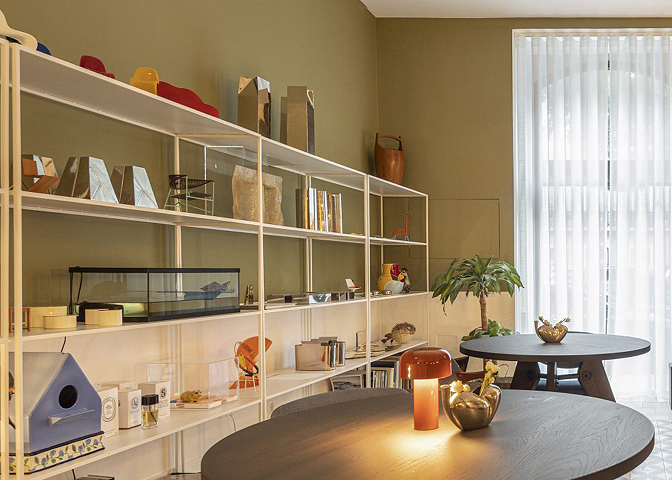 Kukas’s best friend was Filipa’s grandmother, who once played canasta with her friends on a card table that now resides beautifully in Casa Fortunato’s library. “I remember she would always have a gin and tonic at the end of the day,” says Filipa. “And the table is full of the marks of the drinks.” When Filipa came into possession of the table, she and Antonio considered changing the green fabric. “But it had lots of stories so we decided to keep it, and it’s one of the things people ask about the most.” 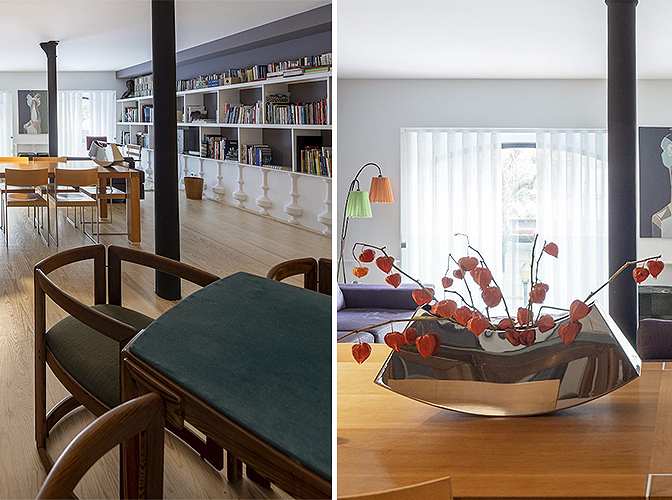 It wouldn’t be a family’s living art gallery without considering the next generation, so naturally, some of the children’s pieces can be spotted here and there. At the top of the staircase, a plexiglass cube houses a papier-mâché cow made by their son Joaquim; in Room Nine, a mask that he made for Carnival. “We have lots of the children’s works on display, mostly from kindergarten, because they were so expressive then. It gets harder to be that free when you’re a teenager.” 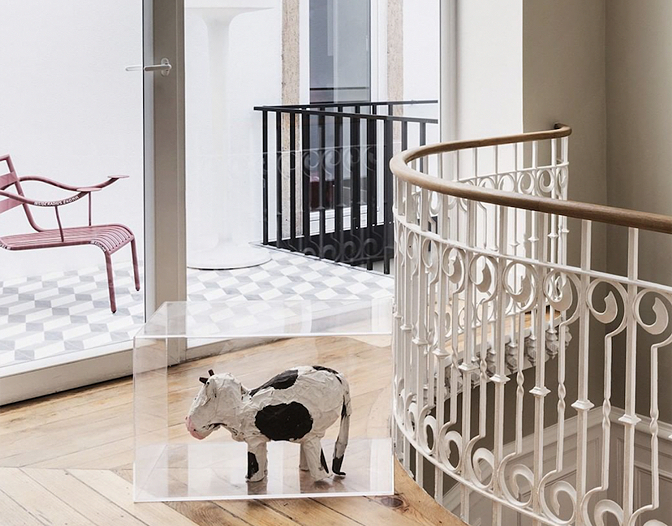 Filipa is right. Time may be fleeting and difficult to capture, but she and Antonio have successfully built a home that will hold it for a while. 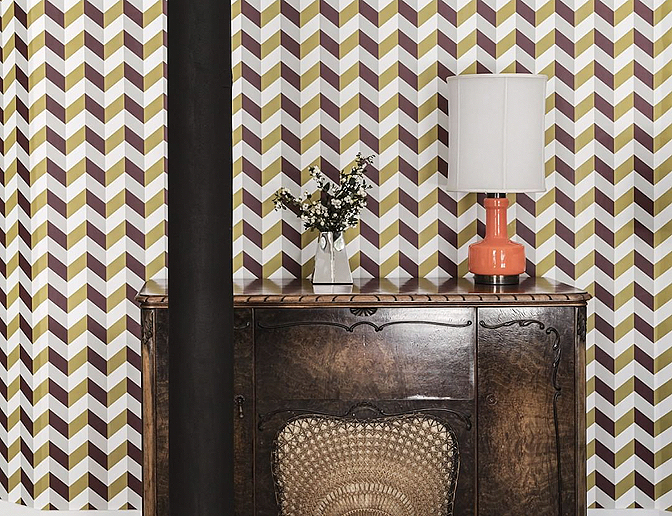 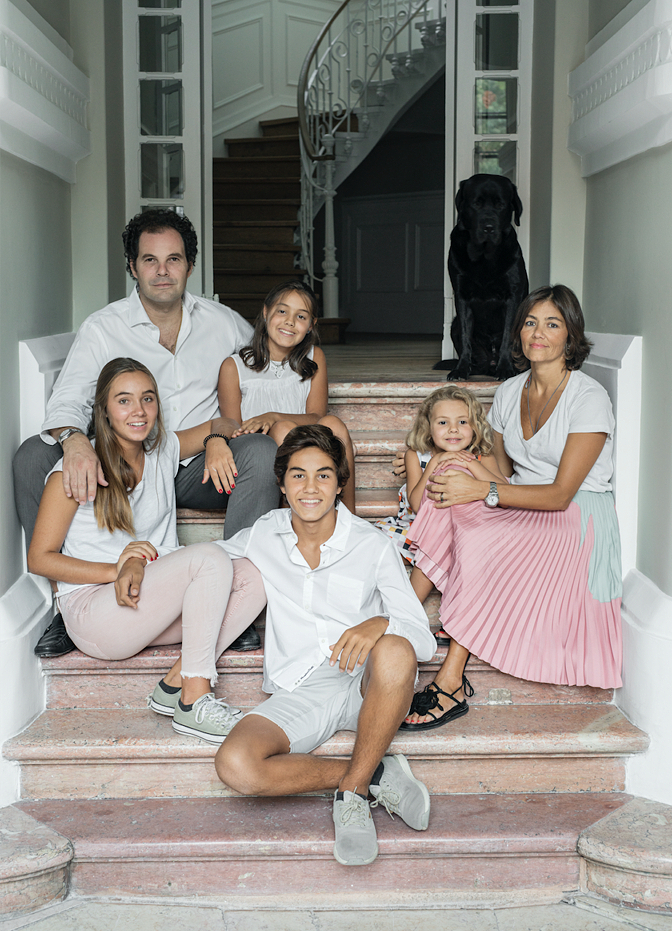