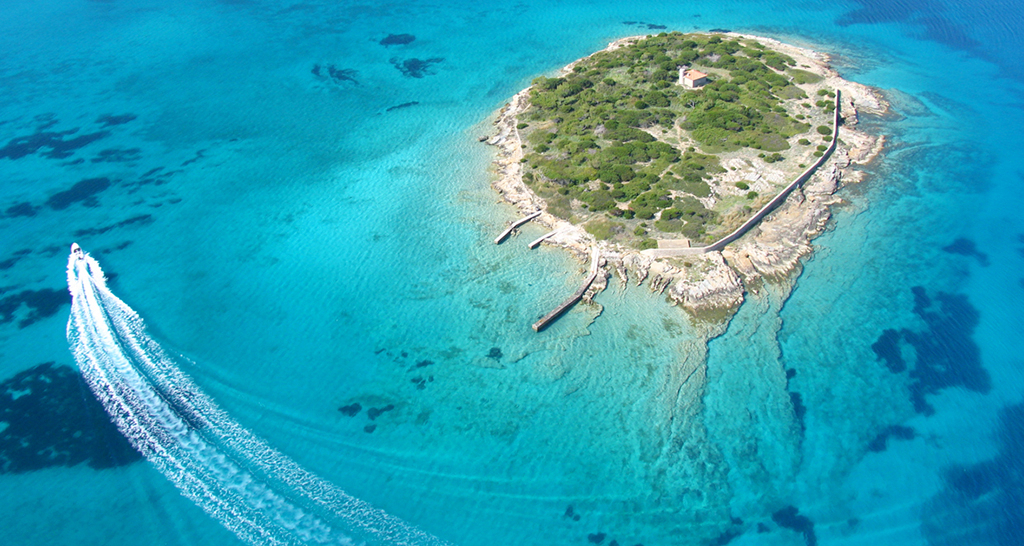 No, your eyes are not deceiving you–this is real! A secluded Grecian island in complete privacy encircled by the crystal clear Aegean Sea. The Greek Island Retreat is part of a small archipelago of mostly uninhabited islands, which at one point were all owned by an Ottoman general and then King George. It’s been in the current owner’s family since her grandfather purchased it in 1916. The owner Maria says of the island, “The only way I could describe it would be to compare it to a dream, because unless you’ve experienced it, you cannot even imagine that it’s possible to have a house in such a location all to yourself. It’s very comfortable and homey, and gives you the feeling of incredible space, the beauty of nature, and the sea.”

The island is accessible from Athens by an hour-long ferry then either a half-hour speed boat ride, or 15 minutes from the airport by helicopter. Maria says, “We have incredible fauna here in the Cyclades such as dolphins, fish, seals, turtles and birds, according to season. The water around the island has beautiful clarity and colors and is absolutely gorgeous to swim in. There are a lot of other tiny islands in the area that are great to explore also.” 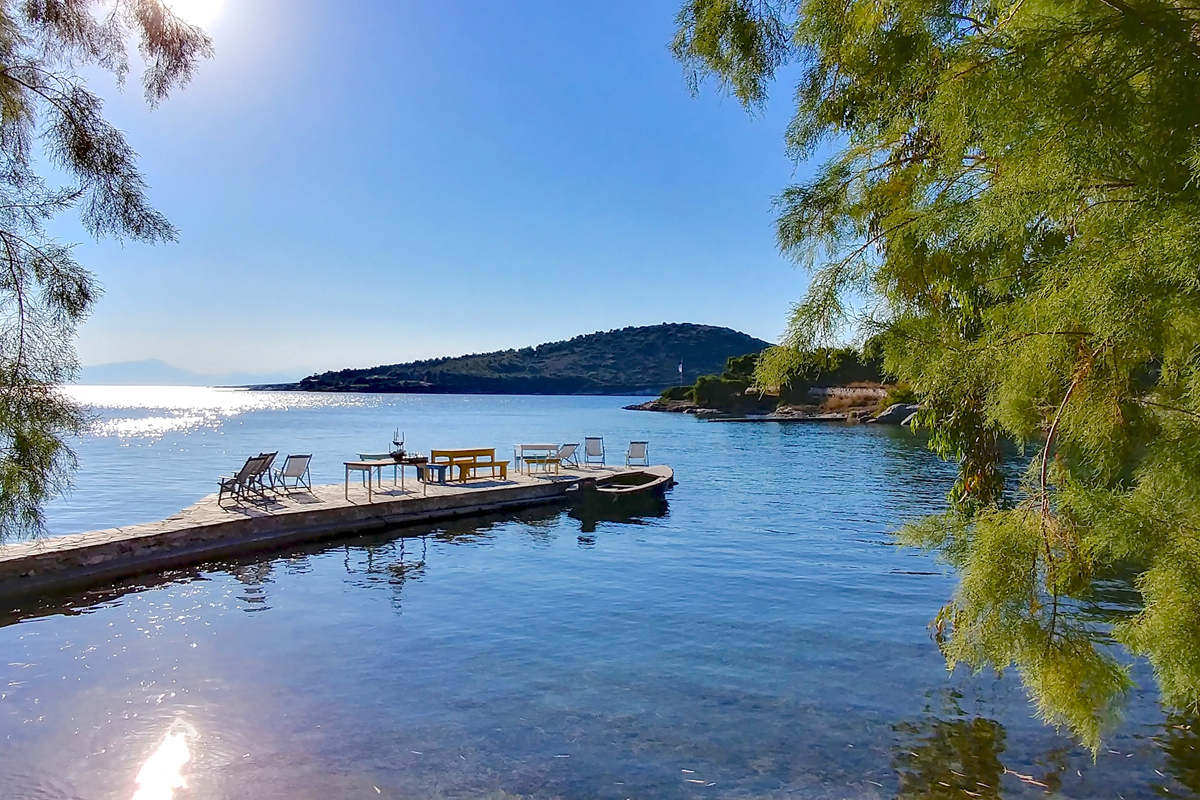 On the island right along the water’s edge, there is a Neo-classical villa that was built in the 1920s that has since been restored for modern living. It’s set within 900 acres of a pristine nature sanctuary so that guests can enjoy the expansive ocean views while immersed in lush Mediterranean gardens, all the while just four steps from the water.

“The house is very comfortable with beautiful large rooms and tall ceilings,” says Maria. “Each bedroom has its own marble bathroom with very nice fixtures. There are terraces all around it that offer beautiful views of the landscape encompassing cypress and olive trees, as well as the sea.” 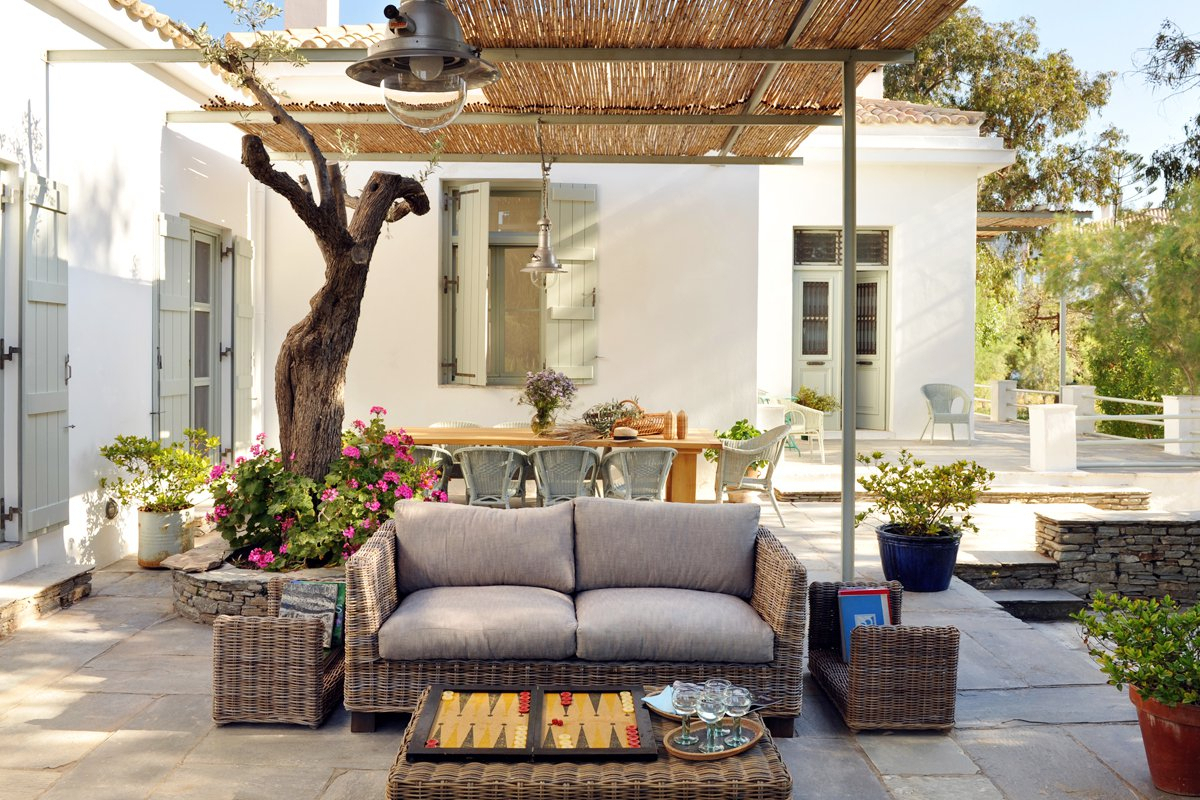 As if staying on a private island wasn’t luxurious enough, the villa has many amenities such as a BBQ area equipped for communal dining, ponies for children to ride, and fresh food grown from the farm on the island. “This is a Mediterranean climate, so we grow with the seasons,” says Maria. “Everything we grow is available to the guests, including fresh eggs.” Water equipment and bikes are also provided for guests’ enjoyment, and seasonal activities like olive oil harvesting are offered throughout the year.

“There is a boat that can be called like a taxi to take you around. Or you can rent a speedboat,” says Maria. “You can go diving, water skiing, sailing or windsurfing, and of course, you can take yoga lessons too. You can go on walks or bike rides or around the island. We can arrange a whole list of sports-oriented activities.”

“You can go to a different beach every day for at least a week,” she continues. “Some are like being at a swimming pool, others offer amazing colors, and yet another has a river path that joins the sea. They all have their charms.”

Maria is incredibly proud of the work she’s put into preserving the sanctity of the space since her grandfather purchased it over a century ago. She says, “It’s been protected and not been spoiled like so many other places since then and we try to continue the legacy. It’s very unique to find something to close to Athens, but still so pure.”

To book a stay at this Greek island retreat, click here. 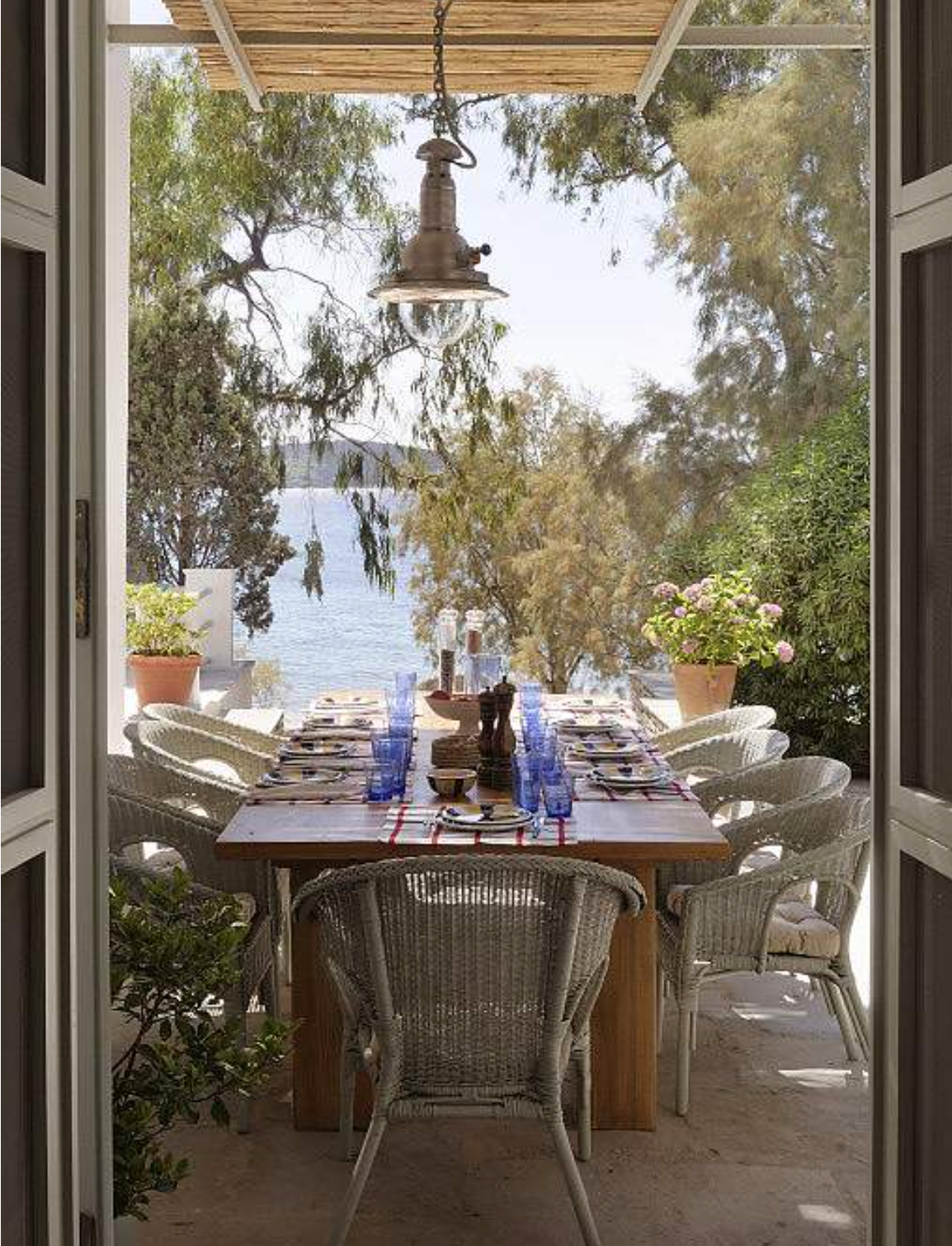 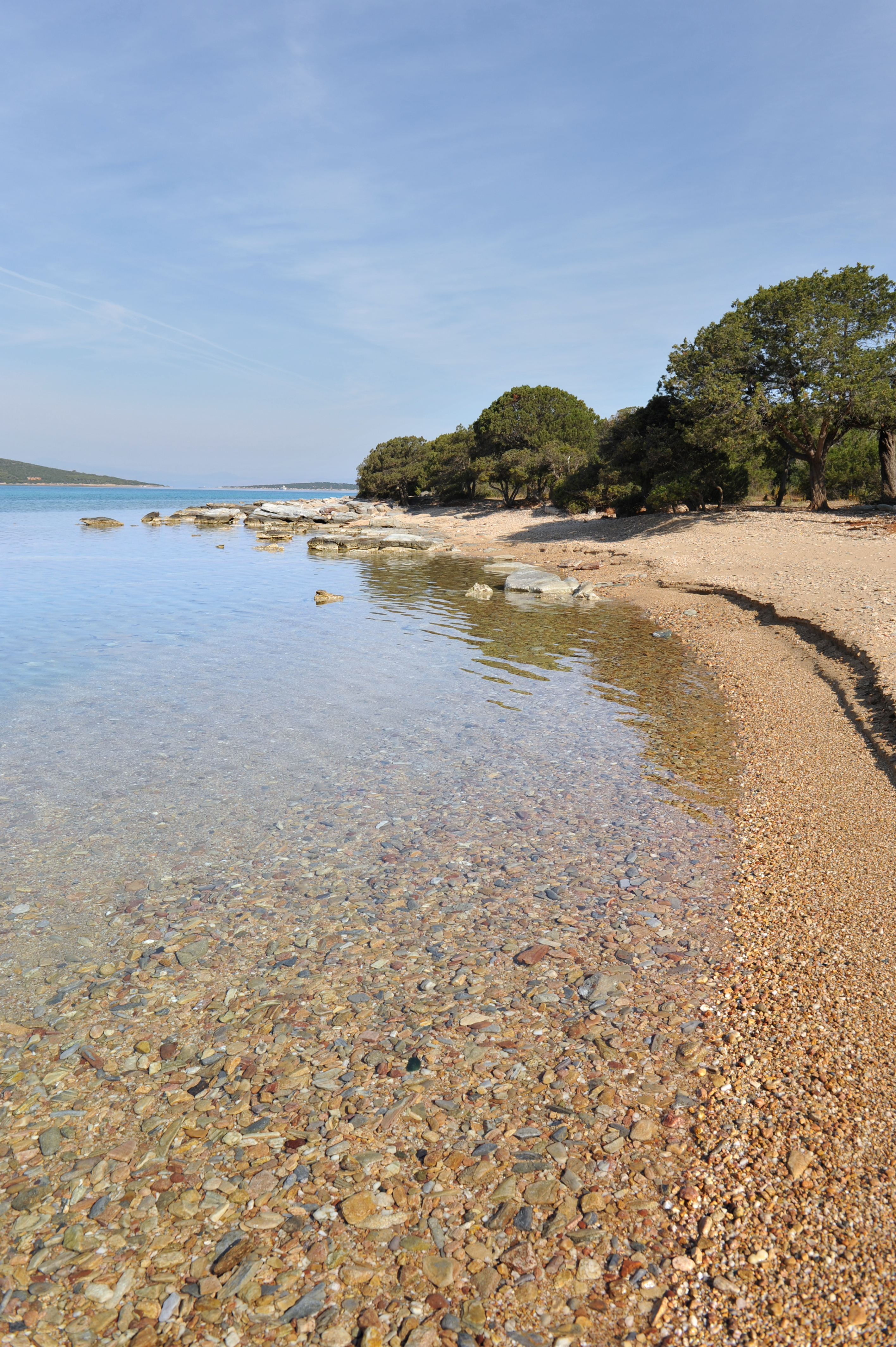 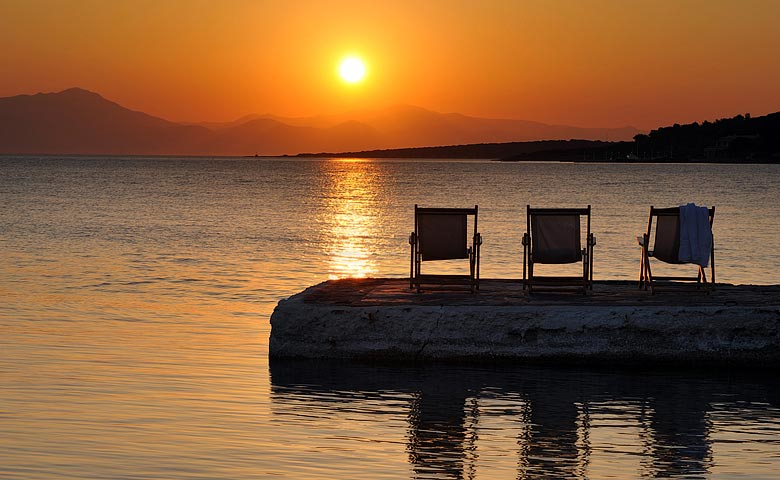 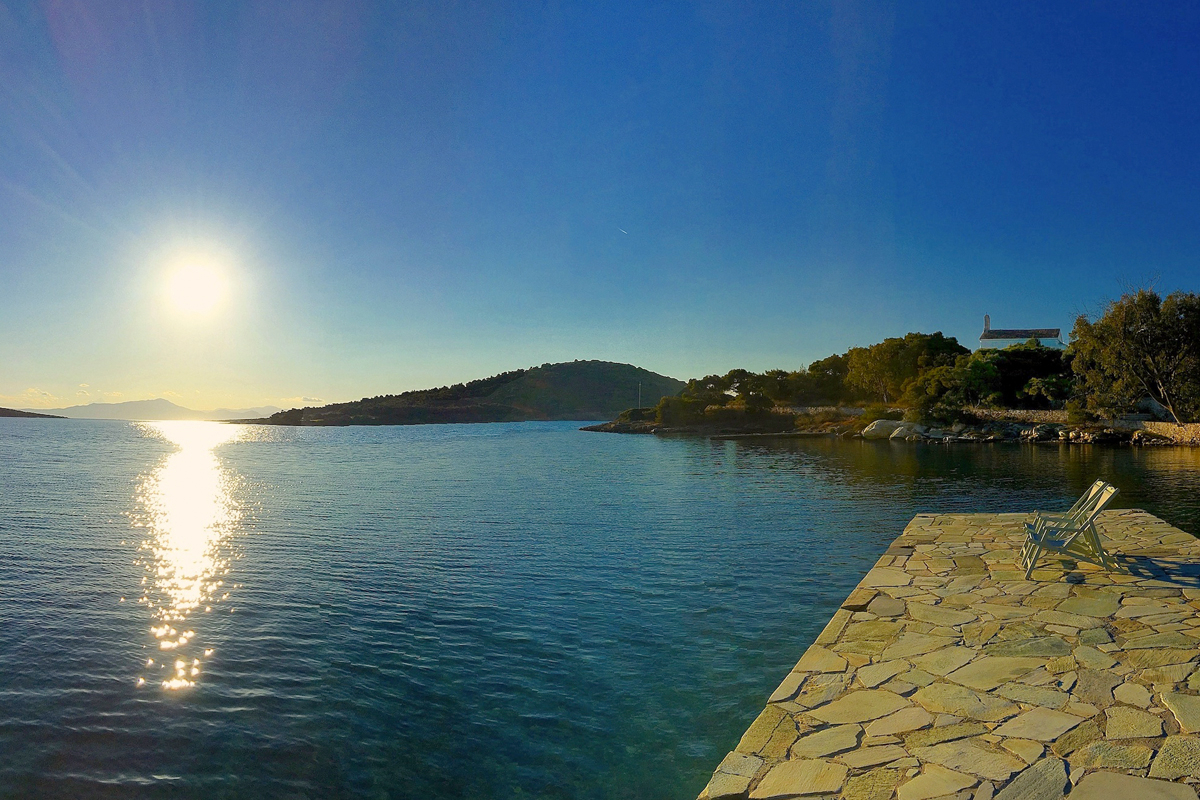