A Conversation with Erle Lima and Jeremy Vital Hermans

If balance is the key to a healthy and full life, then even the most intrepid travelers should come to a point where not going anywhere appeals most. Jeremy and Erle, owners of WonderINN Mirrored Glass Cabin in the quiet nature reserve of Nordre Øyeren just 25 minutes from Oslo, can relate. After years of exploration and meeting other like-minded wanderers, they wanted to sit still and build a place that brought the adventurers to them.

And so, Erle, who is originally from Norway, and Jeremy who is from Belgium, found a plot of land by a lake, and fell in love with the view, the forest, and the animals. By installing a cabin that (literally) reflects what they loved, they found a way to stay stationary in spectacular style: by traveling another path they’d not yet been down: as hosts.

We spoke to Jeremy and Erle about their journey. 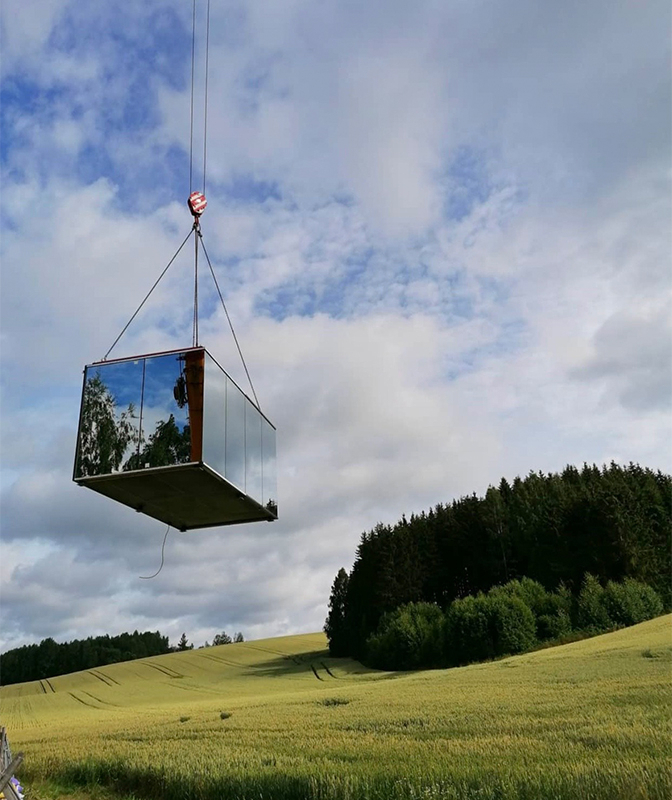 The WonderINN cabin was manufactured in Estonia, and delivered to Erle and Jeremy's site in Norway

HOW DID YOU TWO MEET?

ERLE LIMA: "I was on a backpacking trip in Thailand when I was 18 and he was on the same trip with a friend. We met at a beach party, and didn’t talk again. But we added each other on Facebook and four years later, I posted a picture of myself at the Sydney Opera House. He was in Sydney too, and messaged me. So we decided to meet up and we hit it off."

JEREMY VITAL HERMANS: "And then we started to travel together. We bought a camper van, renovated it, and drove it through Australia - six months in a camper van. And that was the beginning of our projects and wanting to build stuff. We'd both been traveling a lot. So we thought it would be awesome to do something where we could meet the people that were traveling. We thought of going to Norway and building something awesome - a tree house or A-frame, and make it really cozy." 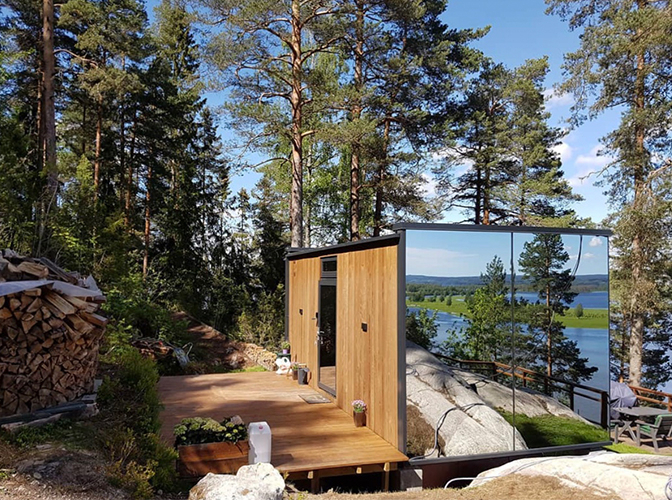 HOW DID YOU FIND THE PROPERTY WHERE WONDERINN NOW IS?

JVH: "We came to Norway, and our first week here, we found already a property in our budget. The only problem was that it had an old cabin on it that needed to be renovated. So we went to the government and asked them, ‘Can we break it down and build an A-frame here?' They said no."

EL: "It was a nature reserve, so they were pretty strict about what was allowed. We realized we had to build something that was close to the fundamentals of the old cabin. And then we researched it for over a year, cleaning up the land and the old cabin in the meantime." 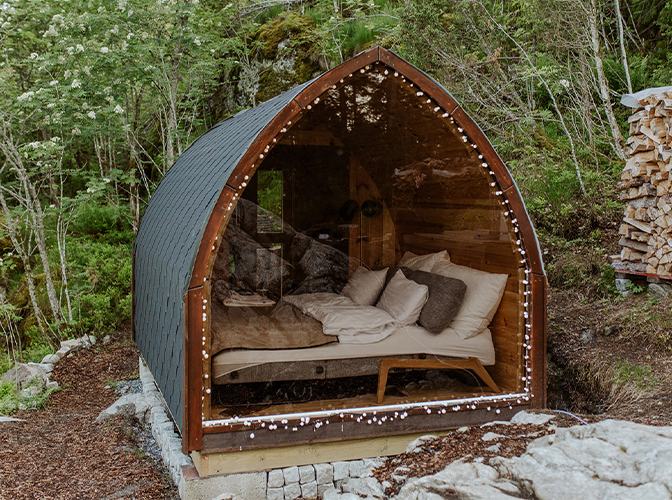 HOW DID YOU END UP WITH THE MIRRORED BOX DESIGN?

JVH: "It was really through Google, just searching for awesome, cool designs. The most difficult part was finding something that would fit the land and make it easy for the government to approve. It couldn’t be bigger than the old cabin, and an A-frame was too radical."

EL: "We came across the mirror design, and immediately liked it. We found a manufacturer, and went to visit them in the Baltics."

JVH: "After seeing the effect of the windows and experiencing what it was like to sleep in a mirrored cabin, we were sold! We could totally picture how it would be perfect for our property.”

EL: "You feel like you’re outside when you’re inside. And outside, it hardly looks like there is a building there."

JVH: "And that’s where the name WonderINN comes from. It’s a play with the word “Wondering”. You’re wondering, “Can the person see me that is inside? Because I only see a mirror.’ But in the evening, it’s the opposite. If the lights are in the cabin, you can see inside it. It’s like a glowing box, in the middle of a forest."

HOW DID YOU GET THE GOVERNMENT TO APPROVE THE DESIGN?

EL: "The design we chose was a few sqm smaller than our original cabin."

JVH: "To the government, it doesn’t matter much if the new structure is smaller. So, we got it approved, demolished everything, and started from scratch again."

WHY DID YOU CHOOSE NORWAY?

JVH: "The nature in Norway is so beautiful. And we thought that if we were going to start somewhere, we should have knowledge of the language and some family. I was up for it. It’s a good life in Norway."

EL: "The only thing I knew about my future [before then] was that I’d never live in Norway again [laughs]. And now I love it here." 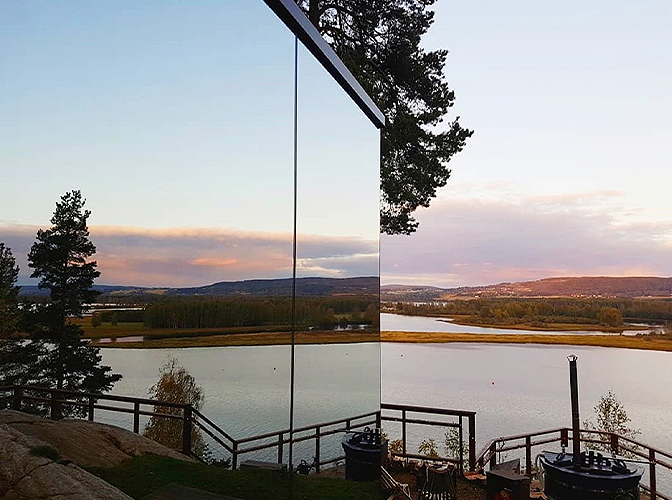 WAS THE INTERIOR ALREADY DESIGNED OR DID YOU HANDLE THAT PART?

EL: "We were able to pick the colors and tiles. We wanted to make it look as natural as possible, so that all the attention is on what is outside. It’s very Scandinavian style, with few high-quality essentials. Clean lines, natural colors."

JVH: "And a lot of it is found secondhand. Erle is very into ecology; she used to work for Greenpeace."

WHAT IS NEXT FOR YOU?

JVH: "In August, we opened another project with two cabins. The first cabin was always booked, especially with Covid, it got fully booked up for months by Norwegians. People were calling us all the time, and we had to tell them they’d have to wait for three months. We found a farm lady with a 450,000 square meter property with forests and a very beautiful river view and we collaborated with her; profit-sharing. She lives there, and we have two mirrored cabin studios on her property. It’s more of a glamping experience, with most of the bathroom and kitchen facilities in her renovated barn. It’s really beautiful; lots of people want to have weddings there next year."

One of the new farm cabins, situated on a grain field 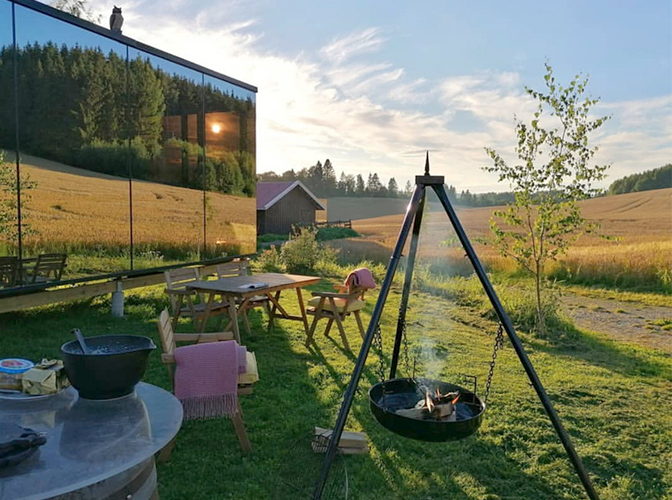 DO YOU OFTEN MEET YOUR GUESTS, AS YOU ENVISIONED?

JVH: "WonderINN is very much for romantic couples, with a code and a key box. We rarely meet those guests, unless they ask for it. That home is often for anniversary or honeymoon gifts. People usually book it as a present.

We are often at the new property on the farm. We make sure everything is fine and ask for feedback. We’re hands-on and show guests around. And it’s nice because the owner of the farm is 70 and she has achieved a lot and now wants people to come visit. She wants it to be a living farm, and has events and exhibits almost every weekend."

EL: "It’s very inspiring to work with someone like that." 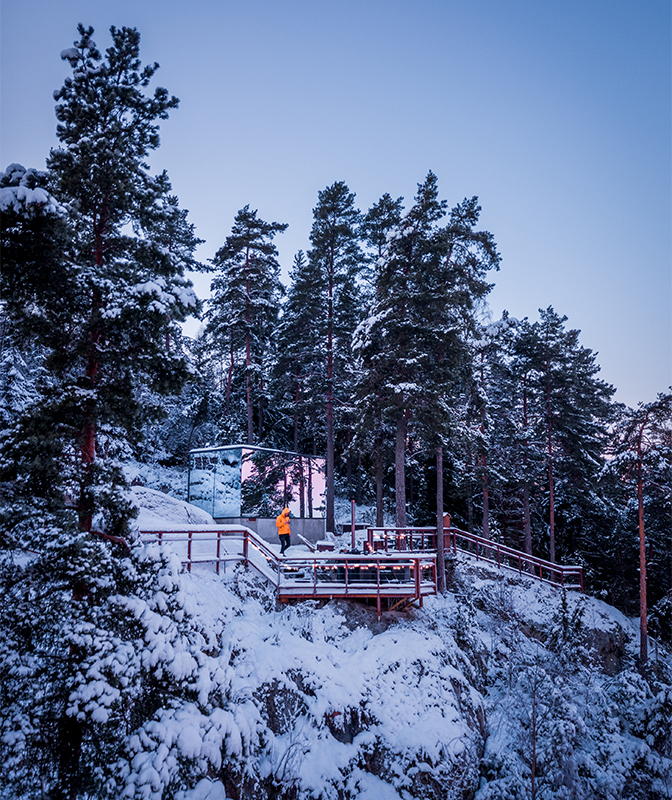